Pyecombe Golf Club is one of the seven courses close to Brighton, and in many ways, I see it as a bigger version of Brighton & Hove Golf Club. My friend Lorraine plays there, so I was keen to see the course through her eyes. Lorraine is a sporting hero of mine. She won the women’s FA Cup in 1983 with Howbury Grange (really! Look it up) and generally excels at every sport she tries. We agreed to play last Friday, as she had just come back from taking a group of disabled kids skiing in Norway. I was hoping that her being tired would mean I might be able to hold my own for once. 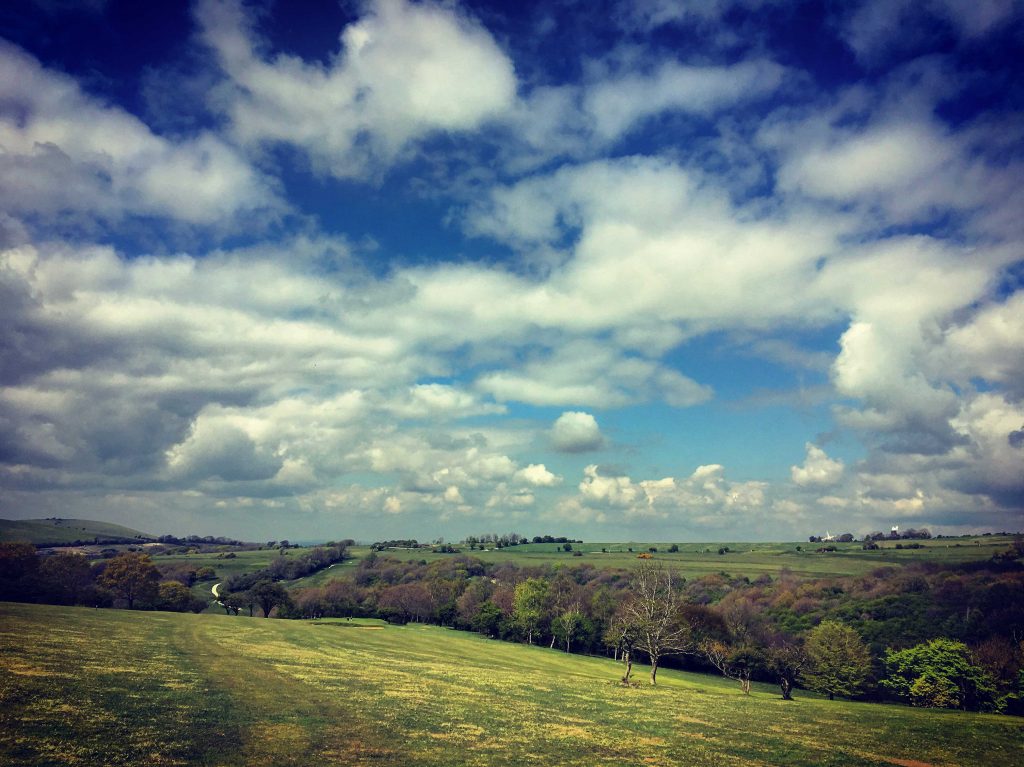 If you squint, you can see Jack and Jill on the right

Before we start, I ask Lorraine why she loves Pyecombe. For her, no two holes are the same, and it is spread out over such a huge area that you rarely see other players. The course also has far-reaching views over the North Downs and is a haven for the local wildlife. Its environmental management is such that it was awarded the prestigious Environmental Golf Club of the Year award last year. Among their efforts to protect wildlife, they’ve installed owl boxes near the 7th tee. They even have beehives and make their own honey! 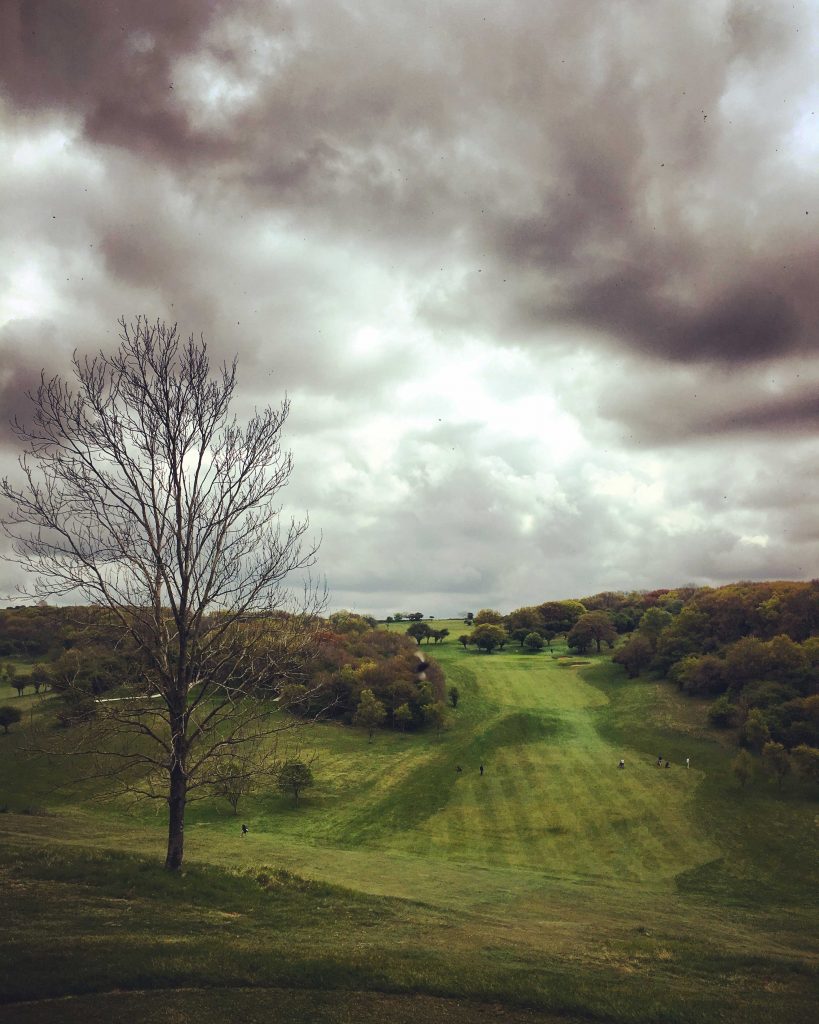 What a great par 5 that is

The course starts with a rather steep climb up the hill and the first two holes are tricky par 4s where a good appreciation of the slopes is essential. Then you get on the 3rd tee and this is where you start getting a feeling of the space you’re in: it’s impressive, down into the valley and then steeply back up towards the green.

It’s a great par 5 where you can really smack the ball as hard as you can on the first two shots. It’s followed by a blind par 4 and a par 3 where finesse and precision are essential. Even though I know the course, I hadn’t appreciated quite how varied it is. Lorraine is right, you know. 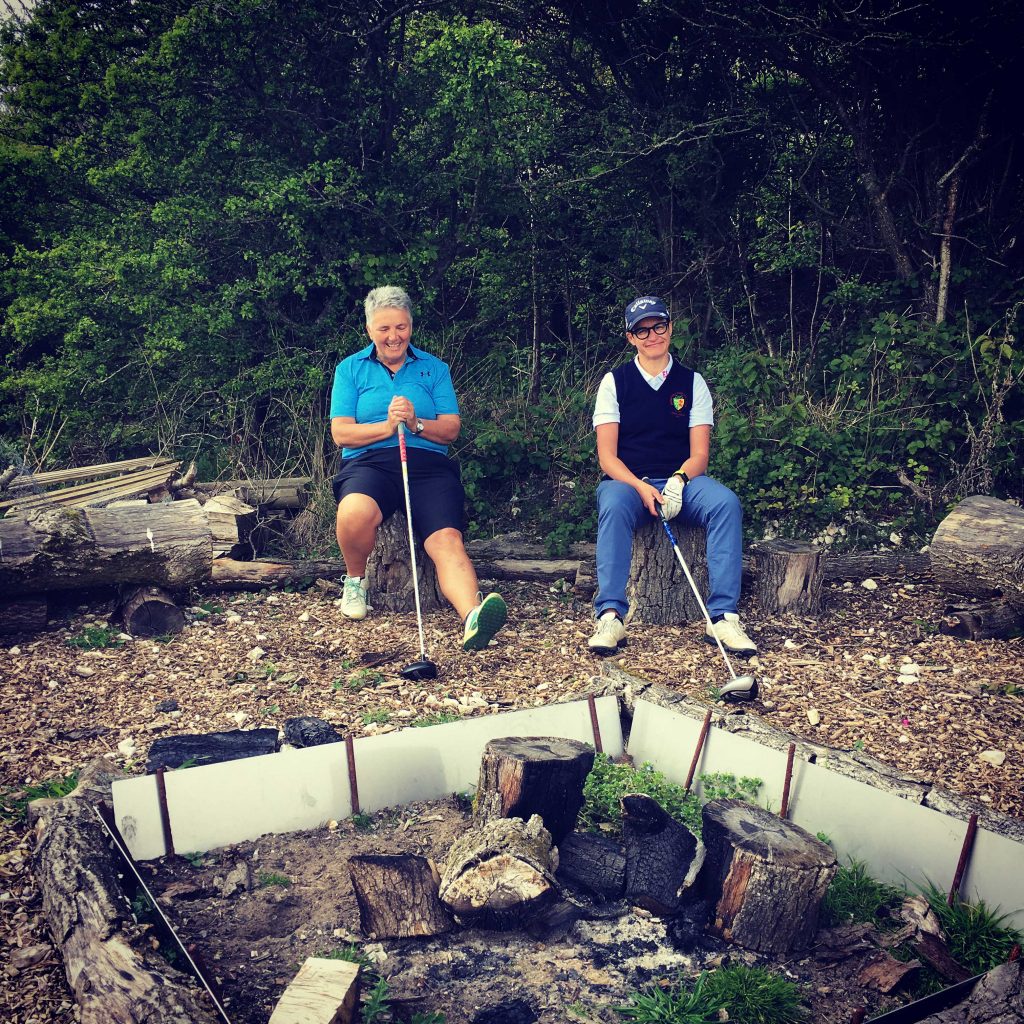 A well-deserved rest after a traumatic par 3

The second par 3, hole 8, is completely different: you have to fire your ball over a chasm and somehow find a tiny green. There are bunkers everywhere. I don’t do very well, but it’s ok because there’s a fire pit next to it which makes for a lovely spot to regain my composure. It’s also a great place to have a barbecue and a drink, apparently. I’m sure it is. I want a fire pit like the one at Pyecombe for my Captain’s day now. Can’t be that hard to build. 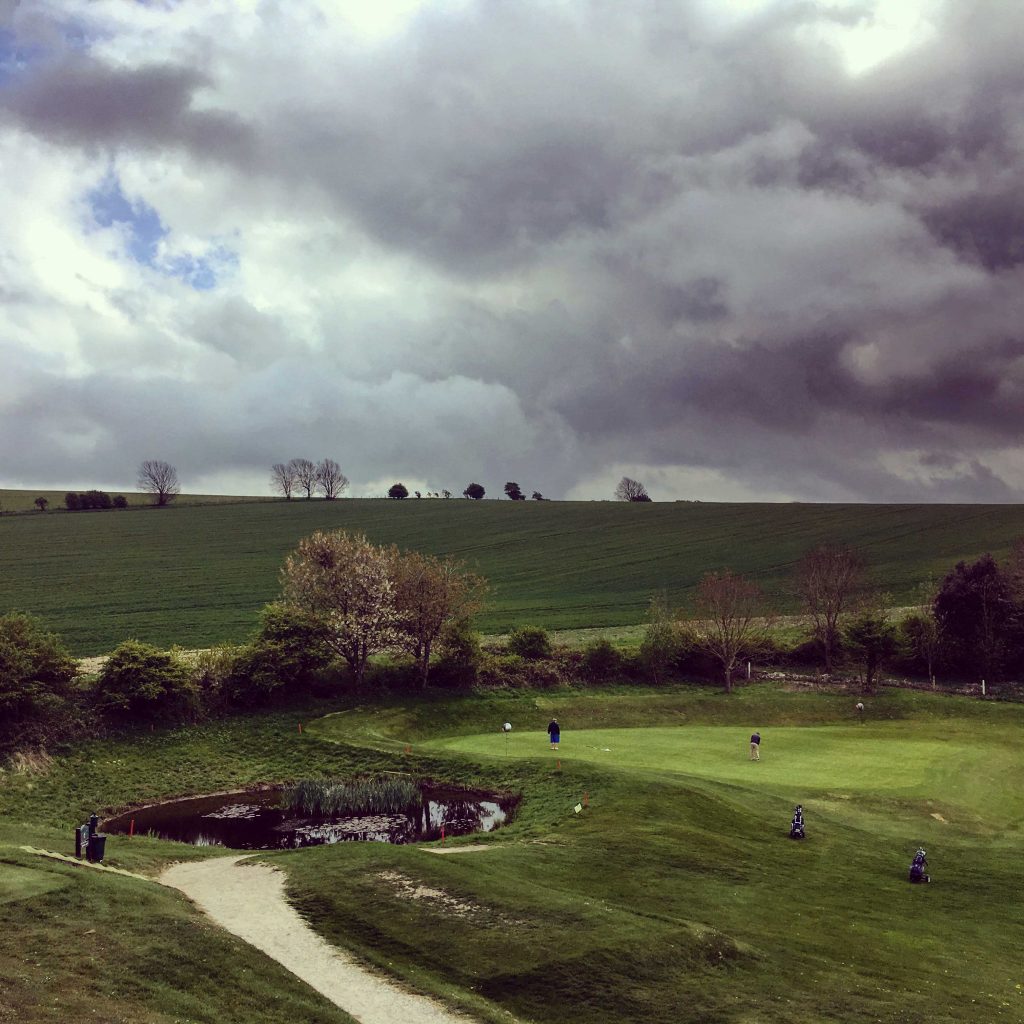 Is it a pond? Is it a green? Is it a cock-fighting pit?

When we get to the 10th green, Lorraine has the kind of story that I love about golf courses. See the pretty pond on the left of the green? Guess what it used to be. Go on, guess. You’ll never guess. It used to be a cock-fighting pit! Then it was turned into the 10th green when the course was built (much more civilised). Then in 1990, it was covered by a mudslide, so they moved it away from the steep bank that you can’t see, on the left of the photo.

From there we play alongside the South Downs Way. We share the amazing views with the many walkers, cyclists and horse riders that use it on a daily basis. The golf is good, the wind is not too fierce, and I’m thoroughly enjoying myself.

When we get to the 13th tee, she tells me that when she first played in a match for Pyecombe, she gave an 8 inch putt to the other team on this hole and was promptly told off by her teammate. This hole is called the Skating rink for a reason: the green is unbelievably fast. It turns what should be a straightforward, short par 4 into a serious challenge. She hasn’t given a putt on it since. Unlike all the other greens, which I found relatively easy to read, it is amazingly deceptive.

From the 16th and 17th holes, you get great views over the North Downs and Lorraine is able to point out several landmarks, including the place where she used to live. When I asked her if she had a favourite hole, she said she didn’t, particularly. It was interesting that, standing and walking on the course, she constantly pointed out places close and far, some of them miles away. Sometimes, that’s what your golf course is to you: a grounding space that allows you to gather in one sweep the places that matter to you. I completely get that: there is something special and comforting for me in being in visual touch with my beloved Brighton while playing on my home course.

Then we get to the 18th hole, which has a special significance for me. I played the course a couple of years ago with my teammate Judy and before teeing off, she told me she’d never parred this hole. Both our tee shots ended up next to each other, blocked by a row of huge trees. “We’re going to have to chip out, aren’t we”, I said. She shot me a look, got her 6 iron out and fired the ball over the trees and a foot from the pin. “Oh.” I thought. I got my 6 iron out and got on the green. I would never have tried that shot if she hadn’t been there. Anyway, she birdied the hole, so she still hasn’t parred it and since then, I’ve loved going over trees. The bigger and leafier, the better. This time, I drove into the rough on the left, somehow managed to get onto the green with my second shot and parred it. One day, I’ll get my drive right. 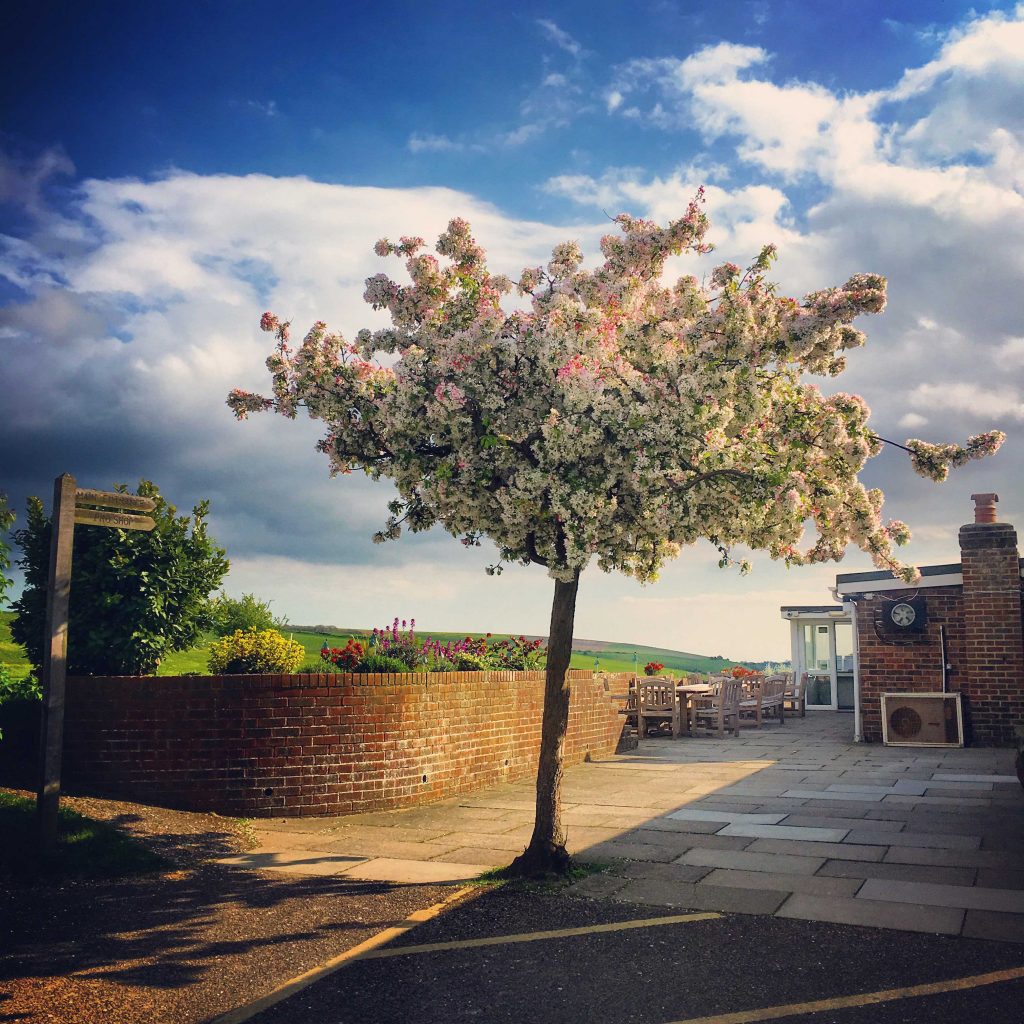 The end of a great round at a great course

All that was left was to enjoy a nice cup of tea and a toasted teacake on the sunny terrace. It was a great round on a great course. Pyecombe is one of those courses that enhances its environment and gives you a real appreciation for its natural surroundings. It was really good to hear about all its environmental credentials, its wildlife and wildflowers, including orchids and cowslip.

You can tell that it’s a well loved and cared for course, so I’m not surprised its women’s section is so big and successful. They have teams in every single division and do well every year. Thank you Lorraine and Pyecombe Golf Club, I’ll be back!