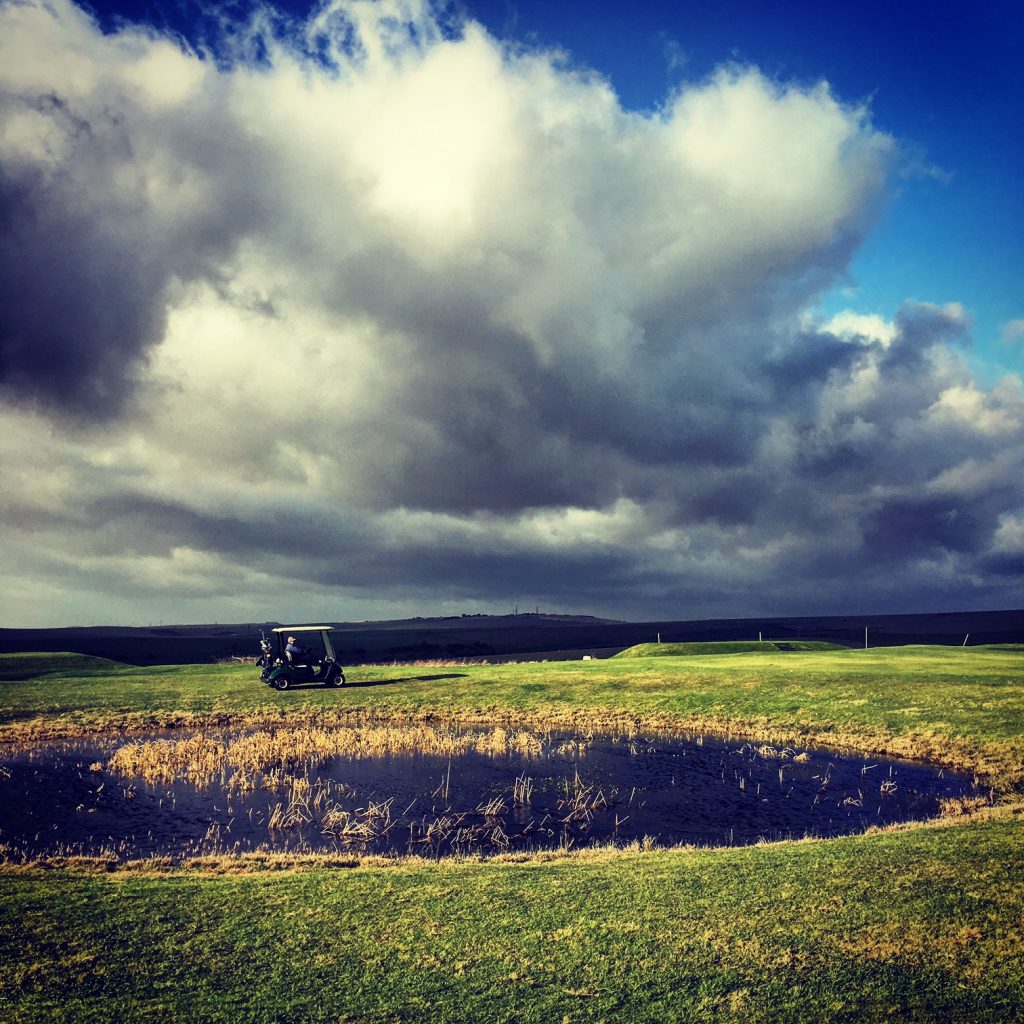 Angela in her buggy by the pond on the 3rd

Today I played with Angela in a Stableford competition. Soon after I joined four years ago, I was playing in the group behind her, and on our 8th (a par 3), I overclubbed and hit a beauty that soared over the green and, to my horror, hit Angela’s buggy as she was just about to drive off the 9th tee. She was very forgiving, but I was mortified. You’ve probably guessed what happened today.

This time, it was an overenthusiastic second attempt at a bunker exit that flew over the green and hit Angela’s buggy. You’ve probably been there: the first attempt is too timid and bounces back in the bunker, so the second is way too aggressive. After the usual embarrassed apologies, we discussed what the penalty should be and she seemed to think that it used to be a shot, but that the rules had changed. As it happens, I carry a handy R&A rule book in my bag, so I checked it. The answer isn’t immediately obvious. At first, I thought rule 19-2 applied:

Ball in Motion Deflected or Stopped

19-2 By Player, Partner, Caddie or Equipment

If a player’s ball is accidentally deflected or stopped by him/herself, his/her partner or either of their caddies or equipment, the player incurs a penalty of one stroke.  The ball must be played as it lies, except when it comes to rest in or on the player’s, his/her partner’s or either of their caddies’ clothes or equipment, in which case the ball must through the green or in a hazard be dropped, or on the putting green be placed, as near as possible to the spot directly under the place where the ball came to rest in or on the article, but not nearer the hole.

However, was Angela my “partner”? No! She is a “fellow competitor”, so rule 19-1 applies because the buggy is deemed to be an “outside agency”.

If a player’s ball in motion is accidentally deflected or stopped by any outside agency, it is a rub of the green, there is no penalty and the ball must be played as it lies.

It was all academic, as my bunker antics meant that I’d blobbed the hole anyway, but it’s good to know for future reference. In summary, if your ball hits anything that belongs to you or your teammate (including you and the teammate), it’s a one stroke penalty. If it hits anything that belongs to a fellow competitor (including the fellow competitor), you just play the ball as it lies with no penalty. Careful though: the rules are different for match play.

Either way, it looks like I should ask Anthony if we can do some bunker practice on Friday…