Muirfield vote on allowing women to be members: why it matters 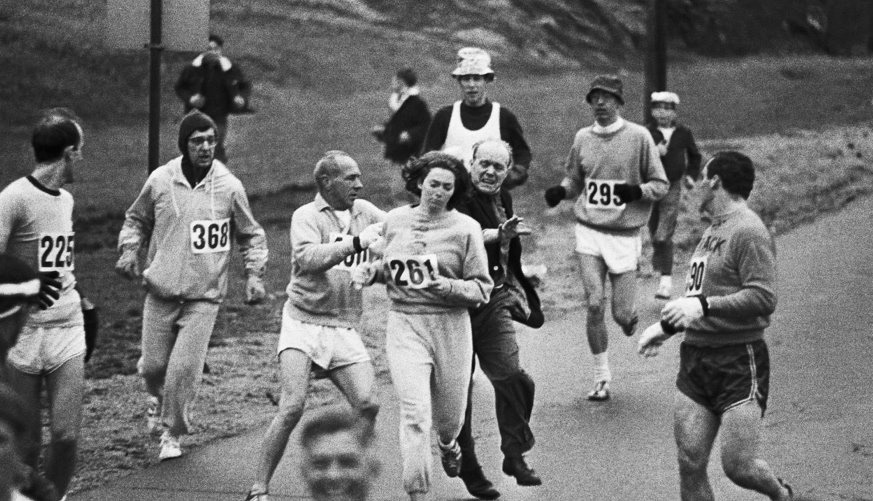 Women’s long battle for equality in the sports world: a race official attempts to stop Kathrine Switzer from running the Boston marathon in 1967. The rule changed in 1972, allowing women to participate

Muirfield, home to the Honourable Company of Edinburgh Golfers, is in the news again and has voted to allow women as members. This is a victory for equality, even if it feels a bit hollow. I’m not the kind of golfer who could afford the joining fee at Muirfield (the exact figure seems to be a mystery, but a round will set you back £235), but even if I were, would I want to join an institution that has rejected women for so long?

Well, probably not, but it’s important that women can join if they want to. Golf clubs are much more than a place to play the sport you love. In fact, Muirfield members have always made it very clear that golf is very much secondary at their club. Alastair Brown, secretary until 2013, famously said: “When I first started here, one of the members told me that I wasn’t the secretary of a golf club, but rather the secretary of a lunch club that happened to have a very good golf course. For a lot of the members, the clubhouse is more important than the golf course.”

And that is the crux of the matter. This is a place where influential people meet, where business deals are done, where important decisions are made over a brandy. When you shut out women from these lunches and meetings, you limit their potential as leaders and influencers. This only reinforces male domination in the worlds of politics, business, finance, etc., and legitimises the boys’ club atmosphere that has characterised our powerful elites for centuries.

Defenders of Muirfield’s decision often point at women-only spaces to justify their policy, but the motivations behind the existence of those are completely different. Sadly, women-only sports clubs are often the only way women get to exercise in a safe environment. I used to play football every Wednesday in a local park with a group of women. The amount of abuse we regularly got, just for daring to play football in a public space, was astounding. If you haven’t experienced it personally, I don’t think you can understand quite how much hostility women can face in the sports world. We now hire a pitch out of the way of the general public. Although I was against that decision, and I still think we should make ourselves visible to encourage women to try football, there is no denying that the whole experience is much more pleasant.

For me, objecting to male-only golf clubs isn’t a rejection of male- or female-only spaces in society; they only become a problem if they perpetuate inequality, exclusion and the protection of a fixed hierarchy. Making sure that women can be members at places like Muirfield is one little step in the right direction.