I replied: “I could never hate myself or golf, Anthony.”

We previously agreed that my long game was a problem and so my swing needed looking at. Fortunately, my grip was ok, but my takeaway was not. Instead of turning my shoulders, I dip the left one, which means that the club face is too closed, the club gets stuck behind me and I have to lurch to the left and back to make the swing happen. This explains why I’m normally unbalanced at the end of it.

So we practiced the takeaway for about an hour together. It’s a short movement of the club head along a specific plane, which sounds simple, but is in fact incredibly difficult, as your muscle memory takes over and wants to do what it’s used to doing. Then I practiced on my own for 50 minutes until I got frostbite. The idea was to go from this: 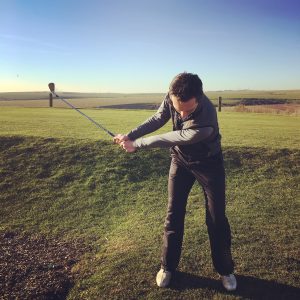 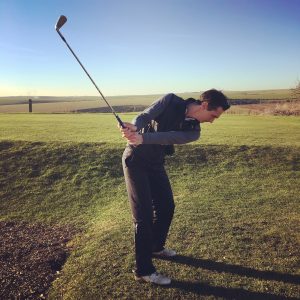 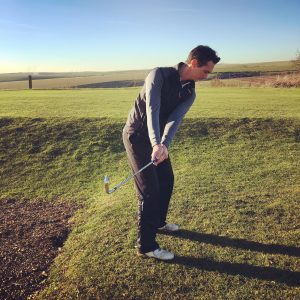 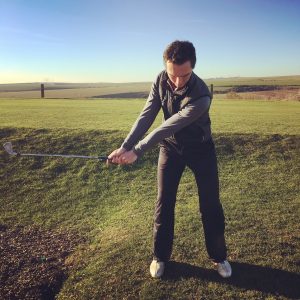 It wasn’t too bad! After an hour and a half, I gained some consistency. The real problem, however, is that Anthony thinks that for the new technique to really bed in and my muscle memory to completely forget the old swing, I need to practice a lot (this article on practice and muscle memory suggests that, unfortunately, he’s right). And not play. At all. So I’m going to be a good golfer and do just that. Instead of playing with my buddies tomorrow, I shall stand on the frozen practice ground and sob hit ball after ball until dippy shoulders are a distant memory. On Wednesday, I’ll go to the club, but instead of playing in the competition, I’ll practice some more.

I’m not yet hating anything or anyone, but I can see how it could happen…

I thought I’d edit this post to report on my progress as a non-playing, all-practicing golfer. It’s hell. I’m under strict orders to practice my takeaway: start the backswing along the line of my feet; stop and make sure the clubhead faces up (see photos above); do that a few times. Then try and hit the ball cleanly. That’s what I did for three hours yesterday and an hour today instead of playing, as I normally would. Sometimes it worked, more often than not it didn’t. I could feel the disconnect between how my brain is used to directing my arms and shoulders and the different movement my limbs were trying to replicate. It was intensely frustrating at times, but today I had a very good last half-hour, where I felt like all the different parts of my body were actually working together nicely, with no arguments. So there is hope!

It’s only when I watched this video taken at the end of today’s session that I realised my hands went far too high. Was it all in vain? We’ll know when I next see Anthony on Wednesday.