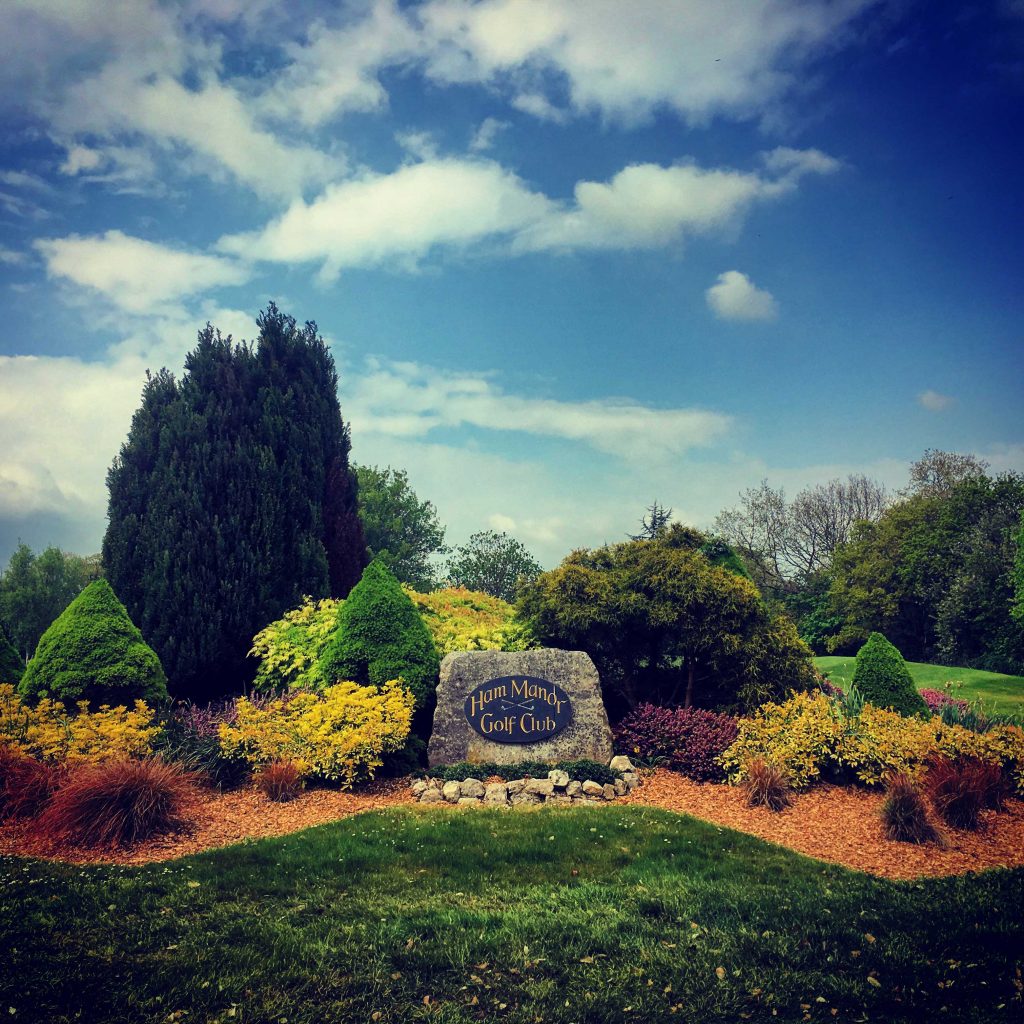 As I walked into the Ham Manor clubhouse, I congratulated myself for not putting my golf shoes on in the car park, as it is the kind of club where such loutish behaviour is discouraged. Then I spotted Wendy and with a frown, an eye roll and an accusing finger pointing at the hat I’d forgotten I was wearing, she reminded me that I still have a lot to learn about the golfing world.

On our way to the pro shop, she told me “I really like your blog and how you write it. It’s… clever, almost.” Which made me laugh. I’d been looking forward to this round with the Iron Maestra as I’ve always admired her bold golfing outfits and her consistency with irons. It had been a couple of years since I played at Ham Manor. The last time I came here, I got very frustrated by the sticky grass at the edges of the fairways. Also, there were far too many trees for my liking. I was hoping I’d notice an improvement in my accuracy so I wouldn’t spend my entire round chipping out from behind tree trunks.

Knowing I’m interested in history, Wendy kindly provided me with some information about the course, so I can tell you that references to the “Manor of Hame” date back to the 11th century. No pig-product-related history sadly, although it may also owe its name to a Saxon word “hamm”, meaning a river meadow or promontory of dry land. These details tend to get lost in the fog of time. What is known is that the lands were owned by the Gratwicke family from the 16th century and the manor itself was built in 1839. It is said that when the estate was converted into a golf course in 1936, the foundations of a Roman building were discovered. It was probably related to the Angmering Roman villa that the course is close to. Instructions were immediately given to cover them for fear they would attract zealous archaeologists with no respect for the sacred game of golf. Too right! 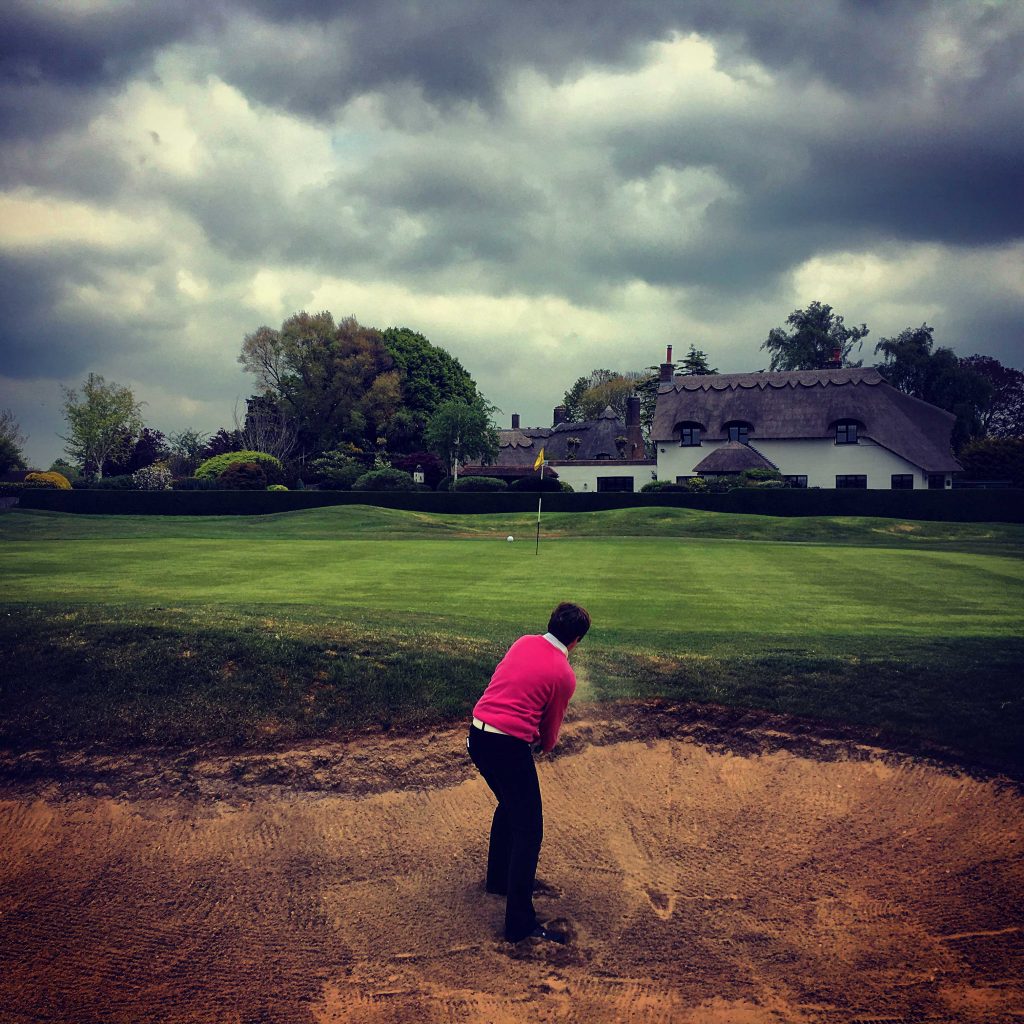 I start by asking Wendy why she loves Ham Manor, and she tells me that she likes that it’s flat. Also, the two nines are very different. The first nine meanders along the houses of the private estate, while the second nine goes out into the fields to the north. The club also has a new greenkeeper who is gradually changing the course for the better. For example, he’s narrowing entrances to some of the greens and cutting down some of the trees (I love him already) because they’re bad for the soil (and golfers). The course was built on an estate that had a lot of established trees and it’s been slowly asserting itself over the old land. There’s a feeling that the course is evolving, which is adding interest to the golfing experience at Ham Manor. Wendy loves the changes and is really excited by the new direction her course is taking.

The opening game was played 80 years before, so we decide that our round is a commemoration of sort. As we start playing, the changes from just two years ago are obvious to me: I really, really like that the fairways don’t abruptly turn into thick grass. There is now a transitional first cut which is a lot less punishing for the slightly wayward golfer. It also adds variety to the round and the types of shots you get to play. 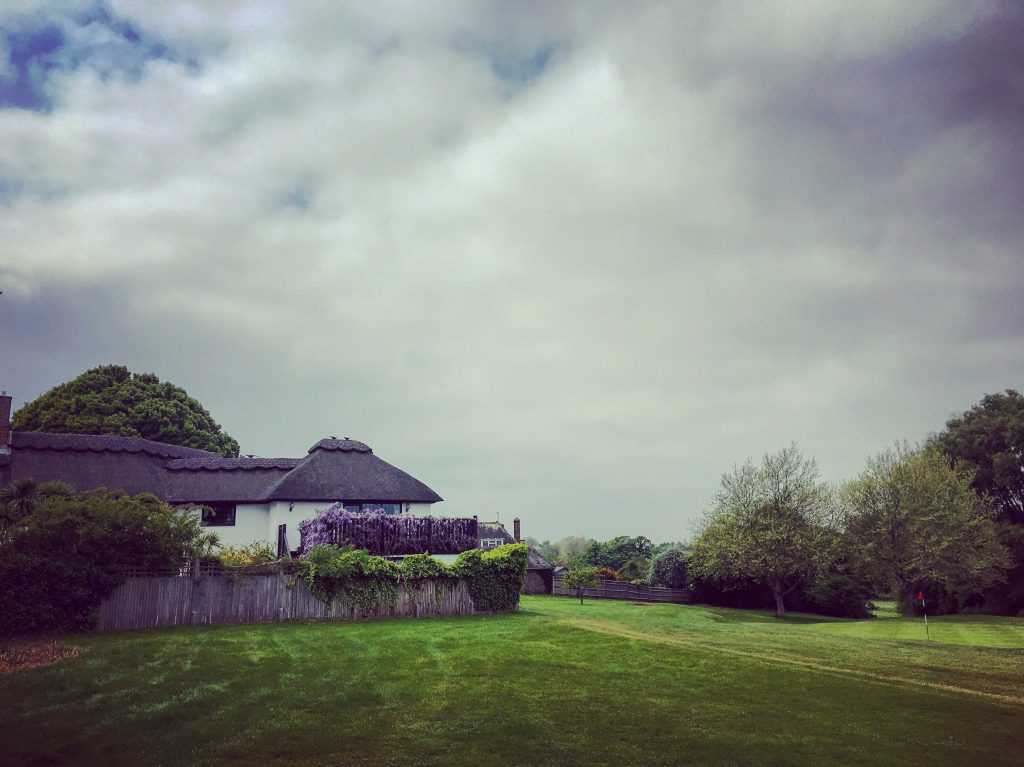 As we’re standing on the 4th tee, Wendy tells me that it’s her least favourite hole. She explains that this first par 3 belies its high SI (16) because so many things can go wrong. There’s a steep bank to the right, a sand trap and a gorgeous thatched house to the left. That’s a lot of distractions. There’s also a wind tunnel on the left which can also be troublesome. Finally, the green is very hard to read and one where you should never give a putt. I miss the green, but a chip and two putts later, I’m happy with a bogey.

As we carry on, the course and golfing experience feel completely different: I’m able to plot my way more efficiently and good shots don’t get punished like they used to. This is a different golf course from the frustrating one in my memory. Or maybe I’m a different golfer. It’s certainly a beautiful golf course, and Wendy tells me that the Autumn colours are amazing. I can imagine the course is spectacular at that time. Trees have their uses, after all. 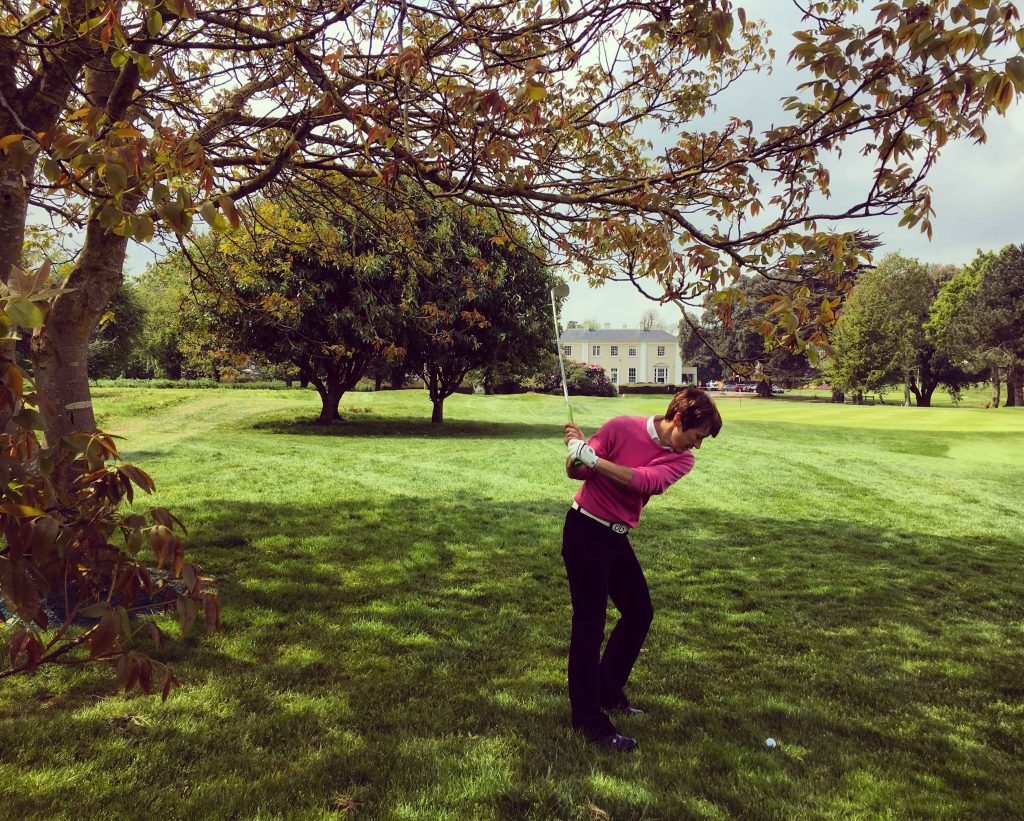 The Iron Maestra on the 9th hole

As we walk up the 9th fairway, we get a lovely view of the historical manor house and Wendy tells me it’s a shame that you don’t get a view of the course from it. She also wishes that this was the 18th hole, as walking towards the house would be a fitting conclusion to the round, like seeing a many-roomed oasis in the distance.

We talk about her favourite holes, and she tells me she likes the 5th because it’s a birdie opportunity, where she got her second eagle ever last year! She also loves the 18th when she plays it well, because she thinks it has great character and likes to do it justice. She also likes the 15th. It’s a par 5 of pretty much the same length as the 14th, which is a par 4, so it immediately feels much more welcoming. I have to agree about the psychological trickery played by those two holes. I enjoy the stern challenge of the first followed by the relative friendliness of the second and I see exactly what Wendy means. 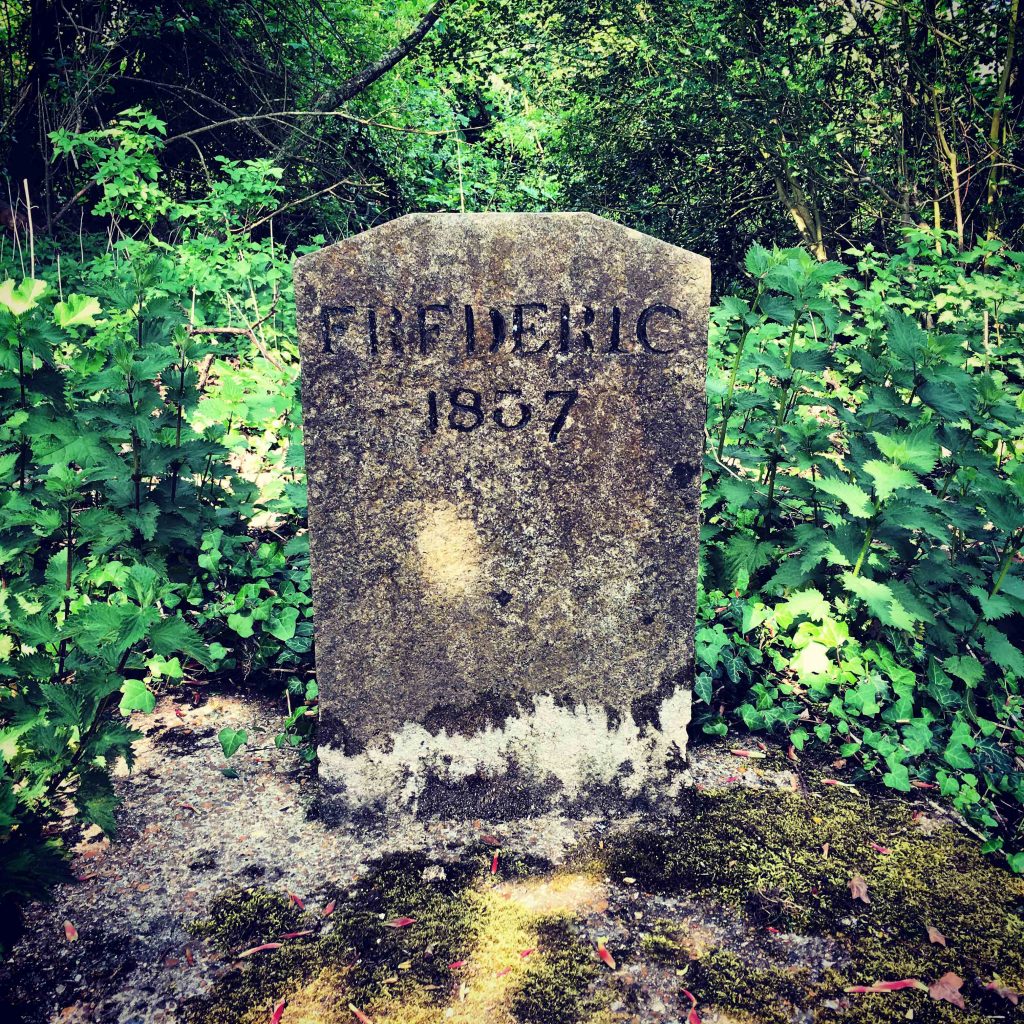 As we get to the 18th green, Wendy points out what looks like a little stone surrounded by fencing on the left, amongst the trees. She tells me that this is the resting place of Frederick, Squire Gratwicke’s racehorse, which won the Derby in 1829. As I get closer, I see that the much-loved mount has been there since 1837.

As we finish the back 9, I must agree with Wendy that it is more open, with fewer trees and much wider fairways than the front 9, which is more intricate. It’s also wilder and more isolated. The constant visual stimulus of the varied architecture is replaced by the serenity of the Sussex countryside. I should like it more, especially as I played it better (41 on the back 9, 44 on the front 9) but I really enjoyed the houses on the front 9. So I’m not sure which I like best.

Sadly, we don’t have time to share a drink in the manor, as I’m keen to beat the horrendous traffic between Angmering and Brighton. However, something tells me I’ll be back for another round, not least because I have a feeling the Iron Maestra will surely want to take her revenge after a close defeat…

The poshest bin in Sussex 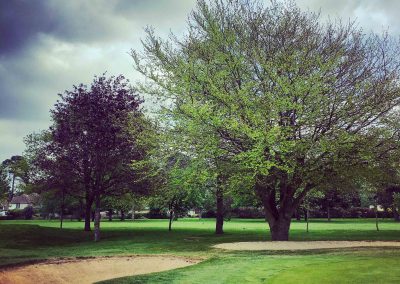 I’ve made my peace with Ham Manor trees 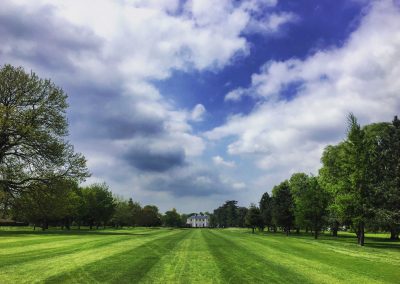 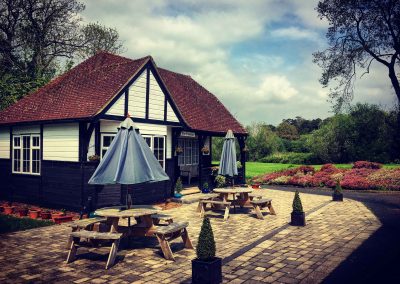