Littlehampton Golf Club is the fourth course I’ve reviewed with a member and writing this, I realise that all four of them have been completely different types of courses: Pyecombe is a downland course, Ham Manor a parkland course and Piltdown a heathland course. And now for something completely different: a links course. Links courses are considered to be the most “authentic” types of courses. They are found on areas of coastal sand dunes, between beaches and agricultural land, as the etymology of the word suggest: it comes from Old English hlinc: “rising ground, ridge”. 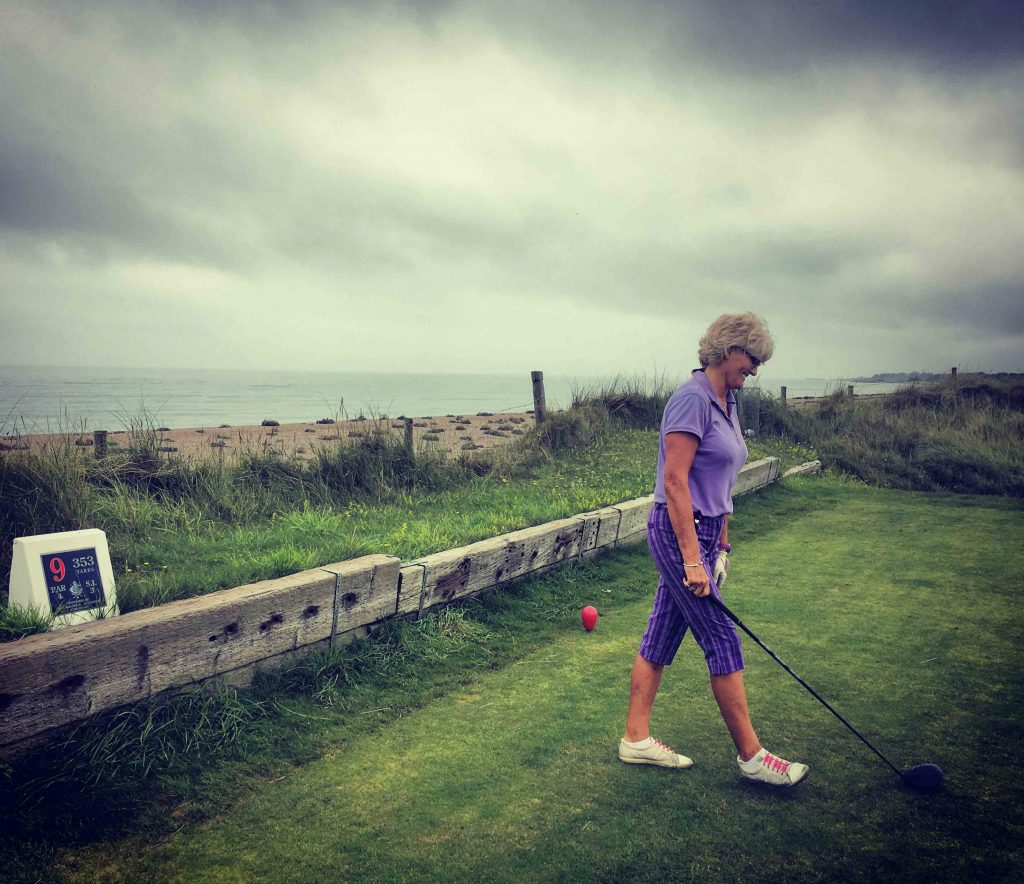 Susie on the 9th

They’re my favourite type of courses, which has something to do with the kind of landscape I’m into. Not for me the tropical islands of many people’s dream holidays. Give me a desolate Yorkshire moor, an arid Utah desert or a rugged Scottish glen any day of the week. Maybe it’s because I grew up stuck between the Pyrenees and the Landes forest that I love big open spaces so much. Anyway. I find links courses wild and beautiful. That’s why I picked Litthehampton Golf Club for my committee away day. As I was looking for my ball on the 13th, Susie spotted me and recognised me from a match we played a couple of seasons back, when she was a member at Ham Manor. I was delighted to see her, we had a quick chat and she kindly agreed to play with me on her course (I don’t waste any time). 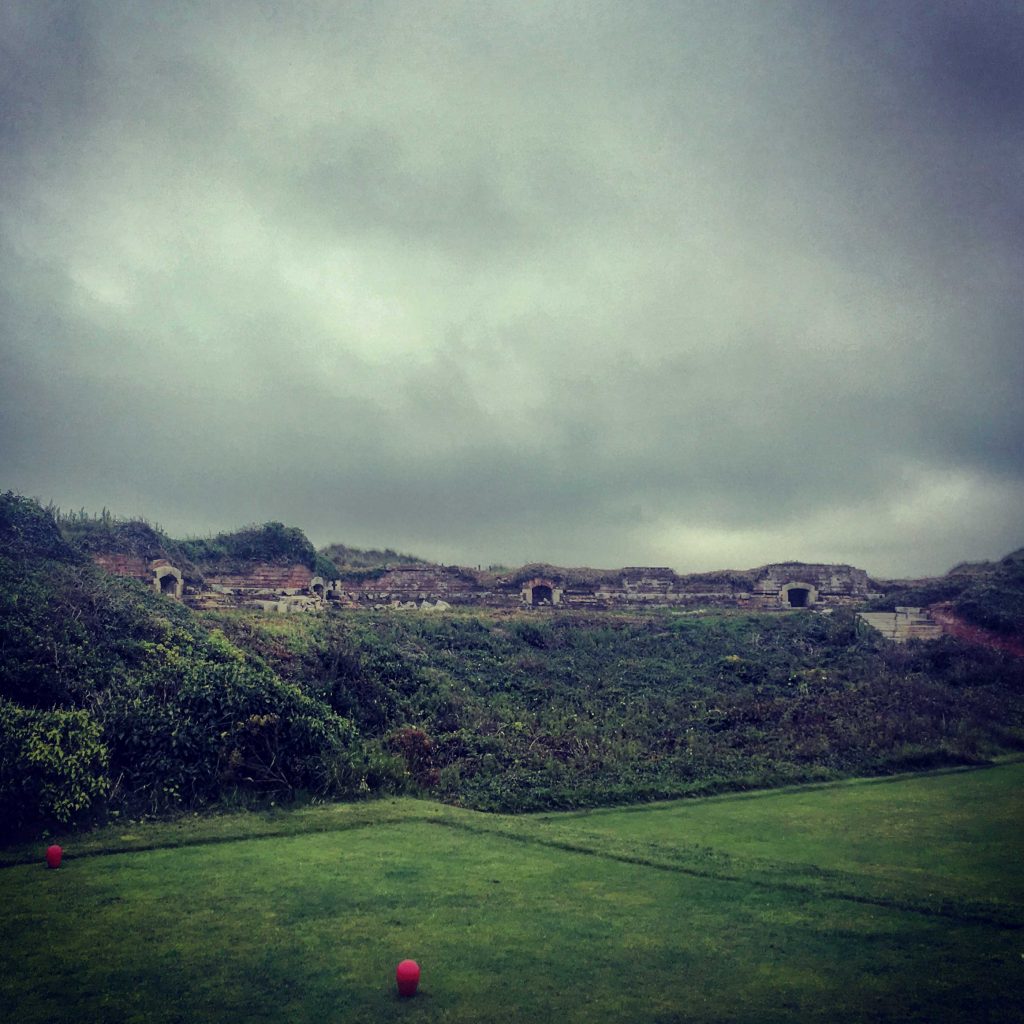 Fort ruins by the 2nd tee

As a bonus, her partner John joins us and from his first few shots, I tell him I suspect he must have played at a high standard once. He replies that he was a decent player in his youth. When I ask him: “What did you play off?”, he replies: “One.” John aka the embodiment of British understatement. We get to the second and there are ruins of something there. I love ruins of something! Susie and John explain that they are the remains of a Napoleonic fort that was built to stop the French using the river Arun to attack Portsmouth. As if we would. They’re quite impressive so really, well done the French for adding historical interest to the course.

Unusually, the day is incredibly calm, with barely any wind at all. Having to contend with coastal winds is one of the main characteristics of links play. Susie explains that it took her a while to get used to it when she moved from Ham Manor, which is much more sheltered. It’s normally very strong and in your face on the front 9, and a bit more helpful on the back 9. For this reason, she’s had to change her approach game and she tells me she rarely chips at Littlehampton Golf Club. She tends to use a bump and run shot to get on the green and she often putts from the fairway. As a result, she now struggles with her chipping when she plays on other courses. Then she finds herself out of position a few times and proceeds to chip superbly, so I’m wondering how good she must have been before. This strategy makes complete sense: the greens aren’t particularly protected and the fairways run very well. She tells me that she even putts from 10 yards off the green. I try it and it doesn’t work. Then a few holes later, it does. Story of my golf, I suppose.

The other reason why it’s dangerous to approach the greens with high shots is that they are rock hard and so, so very fast. I try and play an easy wedge onto the fifth and the ball just pings off into some pretty nasty tufty bits of rough. The greens are huge, which is also a defining characteristic of links golf. This means that the holes play very differently from one week to the next. I can see that, especially as they are anything but flat. They undulate in every direction, which makes putting even tougher than usual. 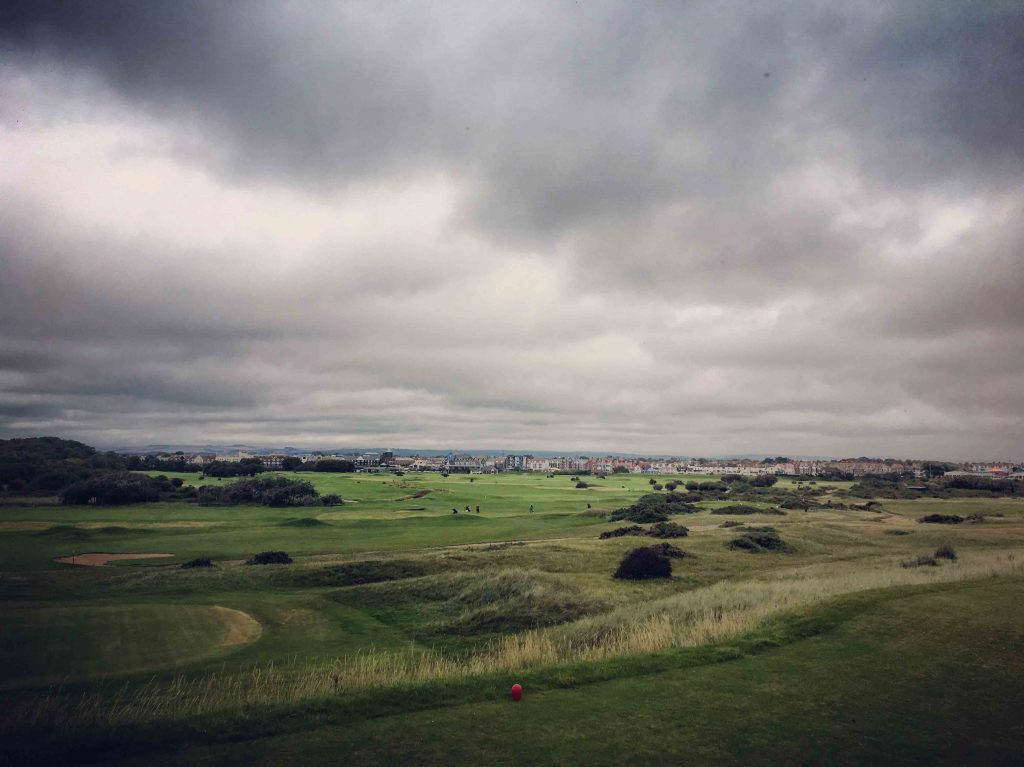 View from the sixth hole 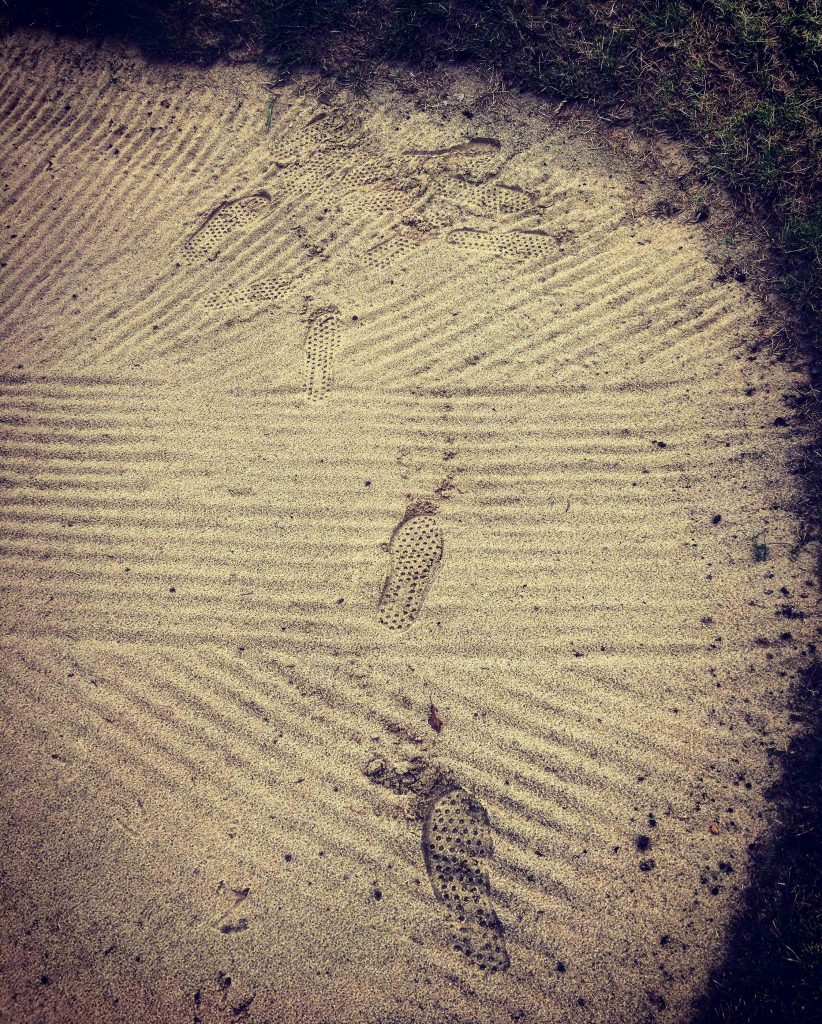 When I ask them what they like about their course, they mention the sense of space and yes, I really get that, especially on the front nine, as you get a view of the sea, the entire course and the horizon beyond. They both say that they feel energised when they’re here and again, I agree. Even now that the weather is grey and drizzly, with the space, the sea and the breeze, you can’t help but feel alive and be happy to be here. I love how the course feels unkempt and rough and absolutely not manicured or manufactured. You get the feeling that you’re playing in a wild natural environment. Again, this is typical of links courses: at the beginnings of golf, resources were limited and course architects kept their design as simple as possible to minimise maintenance and cost.

The fairways are wide and forgiving and the rough isn’t too punishing, with the bunkers the biggest danger. There are small and deep and horrible and staying out of them is my absolute priority, so I try and plot my way carefully around them. John tells me that there are only two rules for getting out of pot bunkers:

He used to play off one. I listen and comply. 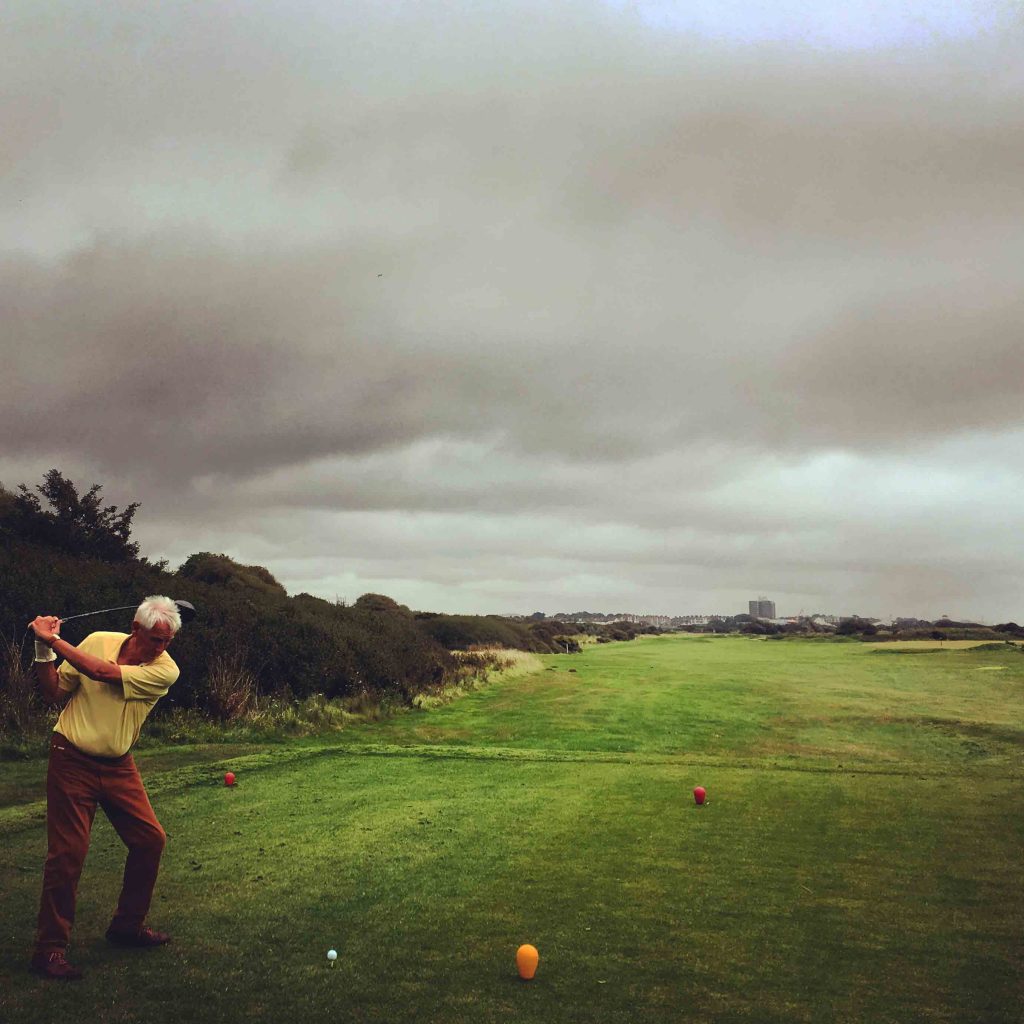 The back nine moves away from the dunes and feels a bit “greener”. There are even a few trees, which is unusual for a links course. Susie tells me that she loves the fact that the club is completely unstuffy and relaxed, with a great mix of people from diverse socioeconomic backgrounds. We get to their favourite hole, which is the 15th par 4, because they both tend to play it well. It takes me four shots to get to the green, so I can’t say the same. John leaves us on the 16th, which conveniently runs by the bar, and Susie and I finish our round in steady drizzle. We retreat to the bar, where they both tell me the story of a disgruntled greenkeeper who burnt down the clubhouse in the 1980s. It was rebuilt in 1986.

Their love for their course and their club is obvious and I can completely understand it: Littlehampton Golf Club is wild and beautiful and a lot of fun to play. The best thing about it? Links courses are few and far between and require a different approach to golf than parkland or downland courses. They are a very different beast and you have to think carefully about every shot. This forces you to try different approaches and strategies, which is refreshing and probably makes you a better, more versatile golfer. I’m already looking forward to my next opportunity to play there. Thanks again Susie, and see you at the Cowdray Park Open! 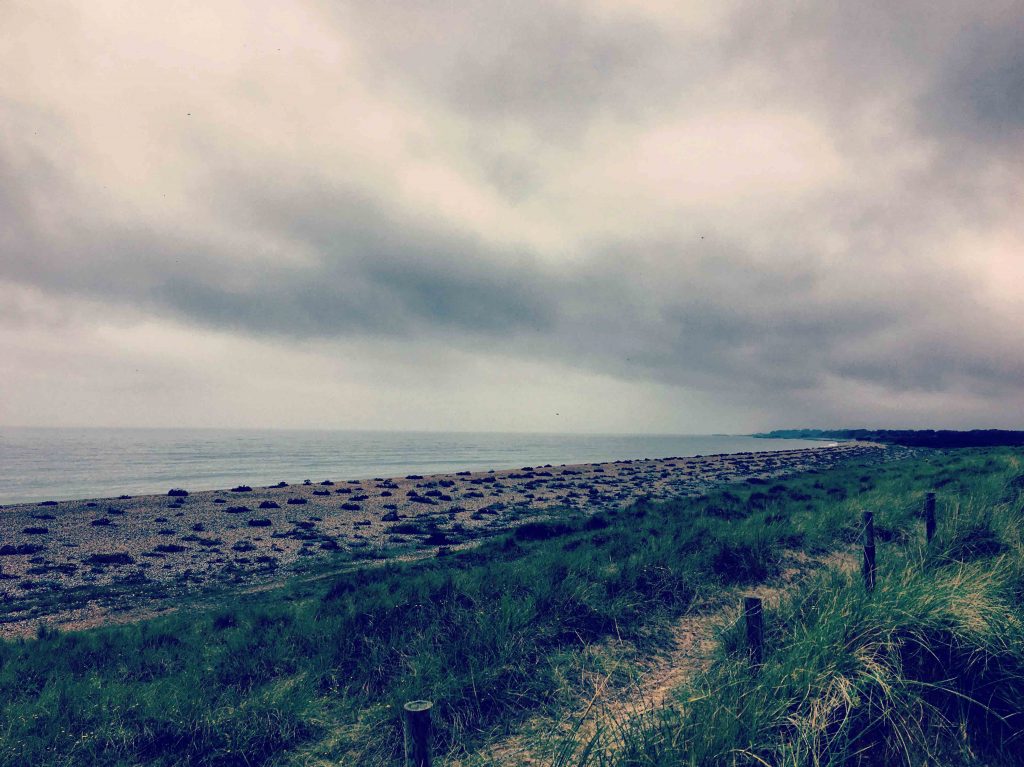