During our Ladies’ section Autumn break at Dudsbury Golf Club, I spotted a rather nice bag in the pro shop, the Sun Mountain H2NO lite. It was on sale (£140) and my own bag was showing signs of giving up on me, so I gave it a good look. It claimed to be waterproof, relatively light (2.4 kg) and it was a bit more spacious than my current one. Most importantly, it was grey and orange!

There was also a funny pocket open at both ends. I couldn’t work out what it was for, so I asked the pro. He explained that it was where you slipped the Zero G belt, which clips around your waist to make the bag easier to carry. It’s the same system as a rucksack with a hip belt, which can transfer between 70%-90% of the weight of the bag on the hips. This would mean that my solid football player’s leg muscles, and not my puny shoulders, would do all the work. Also, it would put less pressure on my back, which is something I’ve been worried about. 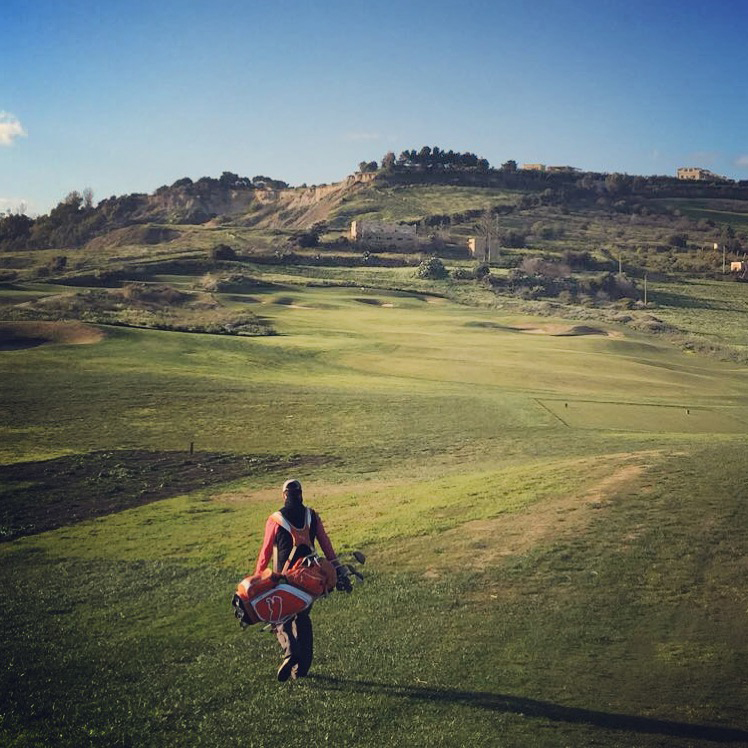 Of course, I didn’t really believe him. I bought the bag because it was orange and waterproof. I’ve never really been happy with a bag since my old orange Puma bag was retired. I started playing golf with a small bag and a half set. I bought the orange bag when I moved on to a big girl’s set of clubs and I loved it. When I turned up with it at the club, Phil, our former pro, said: “Are you a Ricky Fowler fan, then?” I replied: “Ricky Fowler the old Liverpool striker?” He looked at me in wonder and said: “I’ve never met anyone who is at the same time as keen and as ignorant about golf as you.”

Anyway. These days I do know who Ricky Fowler is. I didn’t bother ordering the Zero G belt (£19.99), which didn’t come with the bag. I started using the bag and I’ve been very happy with it, particularly in the rain. We have had a wet Autumn, but the bag performed well. I also liked having more dividers than usual (14 in all) and more space to put the 20 balls I generally need to carry with me. The only thing was that it was heavier than the bags I’ve had so far, and I noticed I was getting tired towards the end of a round. Was it time to try the belt, after all? It was. 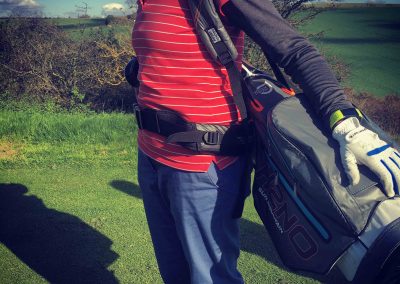 Magic Zero G Belt from the side 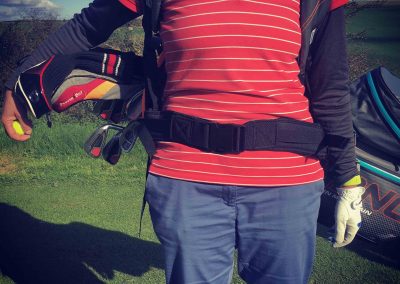 I ordered the belt, it arrived, I fitted it on the bag. I put the bag on my shoulders and a miracle happened. The bag became weightless. Ok, maybe not completely weightless, but much, much lighter. It was a completely different experience from carrying a bag without a belt. I was delighted. And it is so well designed that putting it on and taking it off isn’t at all faffy and takes no time.

So would I recommend it? Hell yeah! This is a fantastic piece of kit. It’s the right size, it has plenty of room for all my bits and pieces, it’s waterproof and thanks to the Zero G belt, it’s practically weightless. And of course, it looks great. I love it.