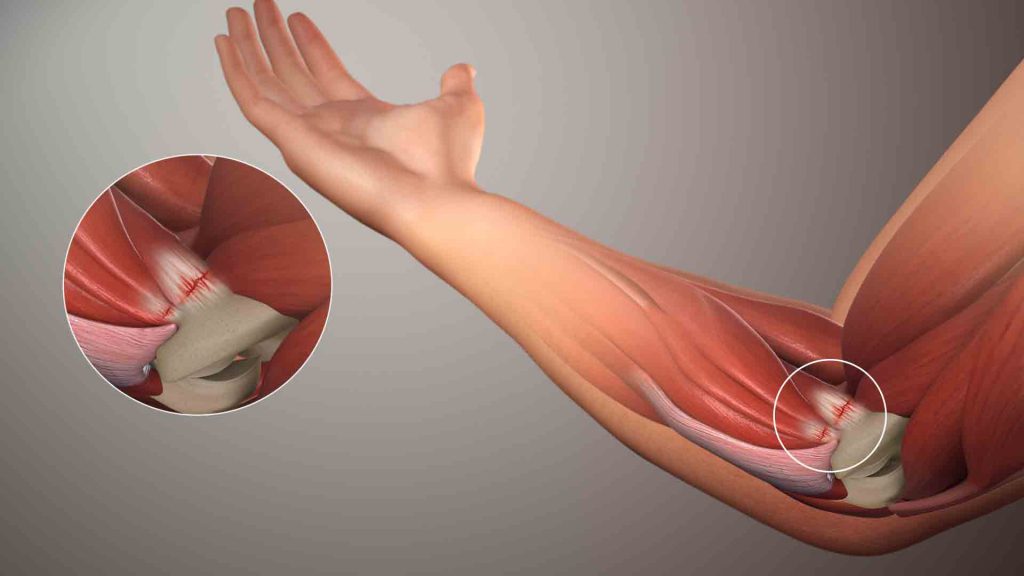 How to treat and prevent golfer’s elbow

For me, it was the left elbow

Maybe it shouldn’t have come as a surprise that I suffered from golfer’s elbow after playing 63 holes of golf in one day. I think I was lucky, because it was never too painful and it only took me a couple of weeks to get over the worst of the pain. Golfer’s elbow is a result of overusing the muscles in the forearm that allow you to grip, rotate your arm, and flex the wrist. This causes tiny tears in the tendon that can lead to severe pain in the forearm.

Also called medial epicondylitis, golfer’s elbow is mostly fixed by the worst treatment of all, as far as I’m concerned: rest. I did stop playing for two whole days, played a round at Littlehampton Golf Club, which made it worse. I took another two days off, played at Crowborough Beacon Golf Club and THEN finally took a whole week off. So I didn’t really rest as much as I should have, but I did play less. 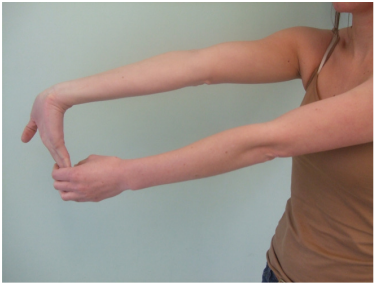 My vice-captain Kim, who is a sports therapist, advised me to perform the following stretch at regular intervals: fully straighten the elbow with my hand facing upwards. Using your other hand, pull your hand down as far as you comfortably can. You should feel a stretch on the inside of your elbow and forearm; this should not be painful. Then, keeping the arm in the same position, pull the hand up. She also advised to massage the painful area. It hurt. I also wore a support strap while playing golf, which did bring some relief.

It’s pretty much gone now, but what can I do to prevent it happening again? I found some relevant advice on the NHS site:

I like this video on how to strengthen your hand, wrist and forearm. Dr Levi Harrison has such a soothing voice that you’ll heal just by listening to him. 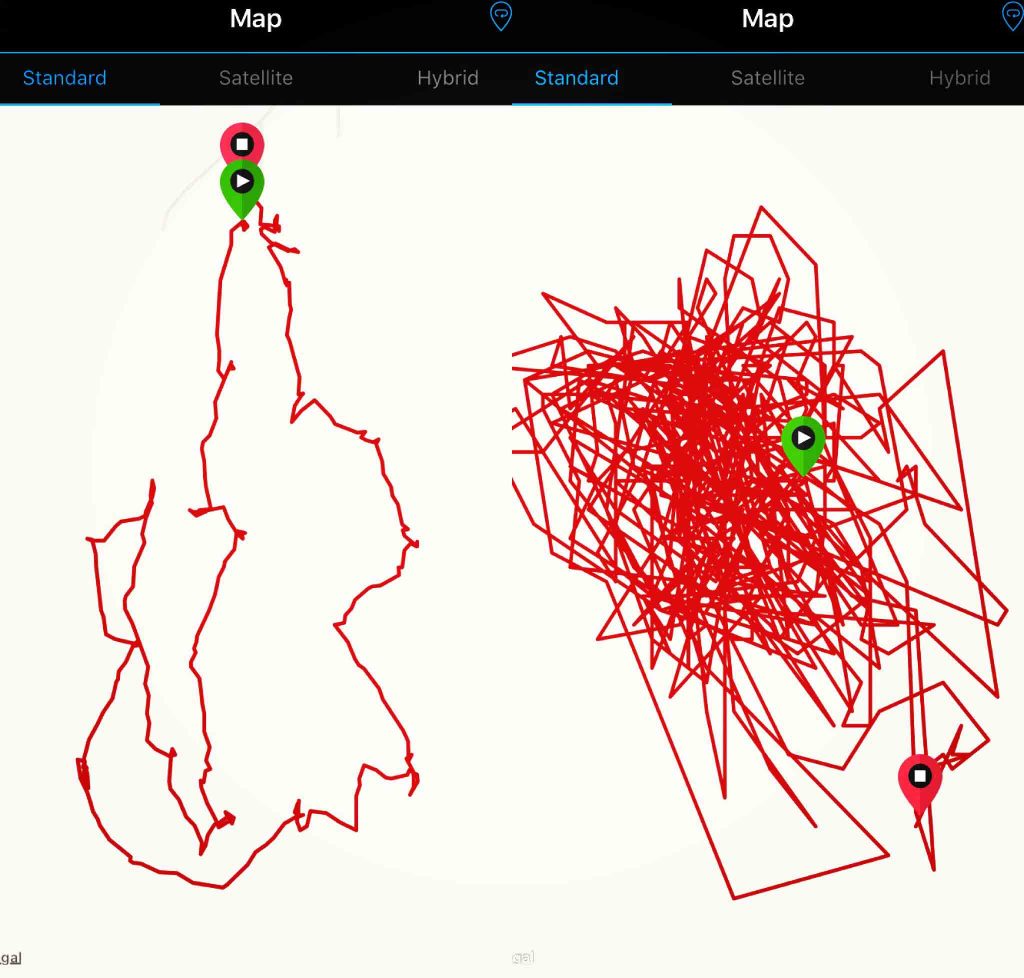 Football is great for your health

The health benefits of vigorous exercise, like football, are well known:

Golf is great for your health, but bunkers

However, although some would deny it, golf is also a form of exercise, just a bit more sedate. And moderate intensity exercise also brings many benefits: 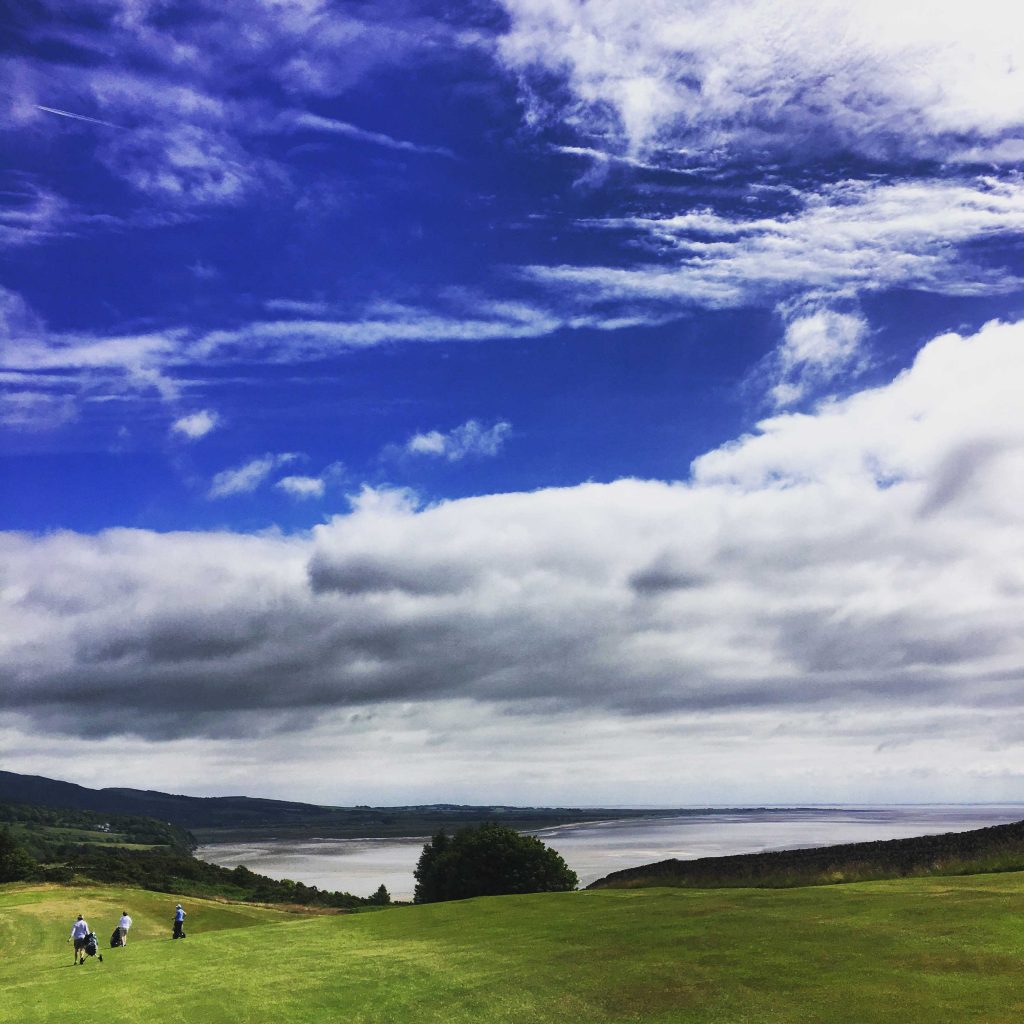 On the negative side, the British Journal of Sports Medicine has an article titled The relationships between golf and health: a scoping review that finds that

This is mostly due to repetitive practice. I once suffered from golfer’s elbow and it was horrible. I thought my golfing career was over, especially as I was told that only a prolonged period of rest of several months could fix it. You can imagine my despair. I try not to think too much about that difficult time. Thankfully, the pain disappeared after 24 hours. I don’t know what that was about.

Golf protects from colon and breast cancer, but the same article says that

I must remember to slap on the factor 50.

Although still infrequent, golf is reported to be the sport with the highest incidence of lightning strike in the USA

Also, I’m somewhat doubtful about the claim that “[golf] can also help to reduce anger”. The BMJ article says that in the area of mental health,

a small experimental study enrolling nine persons with severe and enduring mental illness tentatively reported a number of mental and social benefits for participants. There is conflicting evidence relating to the effect of golf and other sports on mood and anxiety, with positive and negative mood changes noted. Improvement in stress and anxiety was reported by two studies, highlighting stress-busting qualities, verbalised as a ‘sense of cool control’ and a ‘release of aggression’. Conversely, studies describe anxieties relating to performance on the golf course.

Conclusion: football and golf both rock, but golf lasts longer

I’m sure I’m not the only golfer who’s experienced murderous rage in a bunker. But whatever the risks, they’re vastly outweighed by all the good stuff golf can mean for your health. In fact, golf seems to me a miracle cure against ageing. I regularly have conversations like the following: “So, Brenda, what do you do for a living?”. “Céline, I’m 82, I haven’t worked in 20 years.” Seriously. Golfers look so young. And I know they tend to belong to wealthier, well-fed, well-looked after sections of society, but a regular four hour walk has to be a big contributing factor.

And that is why everyone should play golf. Everyone. What are you waiting for? 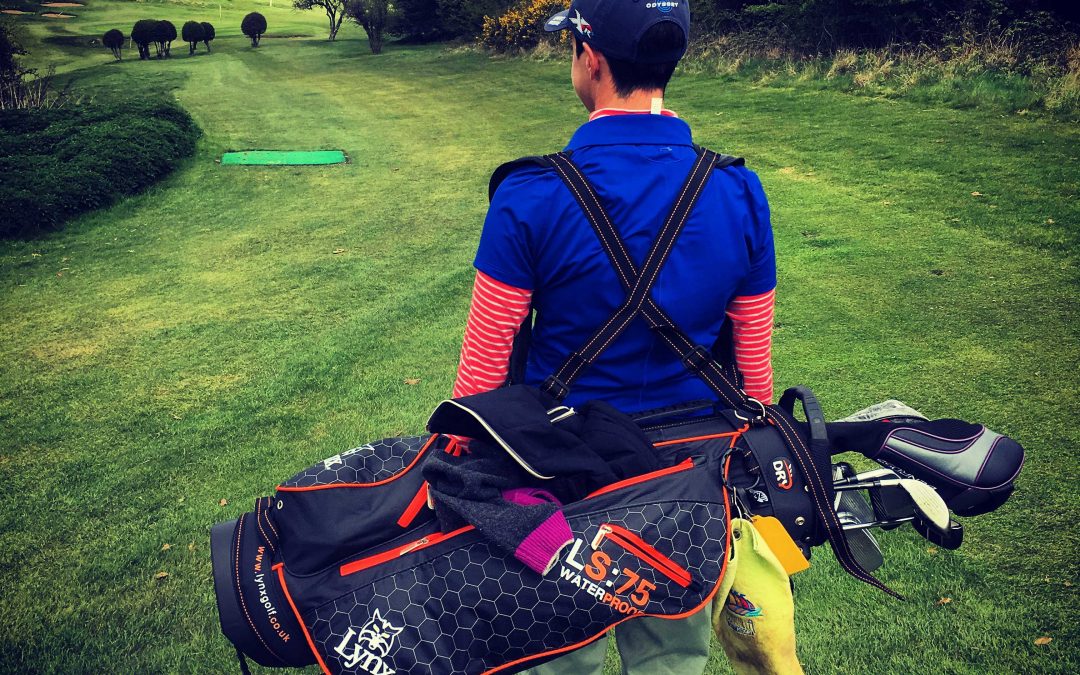 Am I damaging my back by carrying my golf bag? 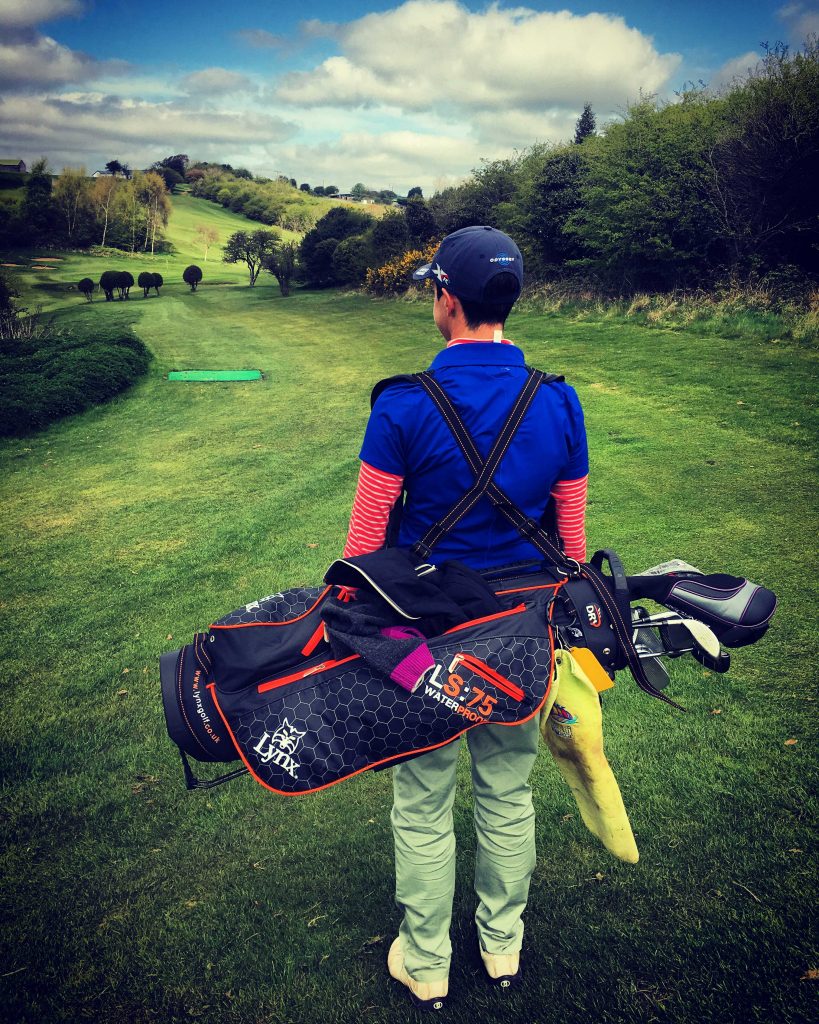 Me, my bag and my current favourite golfing outfit

Jan is worried about my back

“Your back may be fine now, but wait until you’re older. You really should get a trolley”, Jan said.

I was pretty sure that carrying my bag wasn’t a problem, however, Jan isn’t always wrong and I do intend to play golf as long as possible, so I thought I’d investigate. I sent a GP, a sports therapist and a physiotherapist the following email:

Could you tell me if you think carrying a bag of clubs while playing golf (mine is around 11 kg) is good or bad, and explain why? I’m getting conflicting views on it. Some say it makes your back stronger, others that it speeds up wear and tear and squishes my discs. I’m worried that I’ll end up with big problems in a few years.

What the health professionals think

Physio: “Looking at the way you carry your bag, I don’t see a problem at all. You always use the straps over both shoulders. There is an 85 year old at Haywards Heath golf club who has always carried and never suffered any pain. Those who are predisposed to spinal problems will suffer and could damage themselves. To carry you must have excellent straps and don’t overload.”

GP: “I don’t think 11 kg is that big a weight to carry on your back, but it depends how you carry it. If it’s slung over one shoulder, you risk shoulder problems and muscular back pain from an uneven load. The general recommendation for people in good health is that they should be able to carry 20% of their body weight.”

Sports therapist: “I agree with Anna (GP) that 11 kg is no weight at all IF carried evenly. Use shoulder straps and do not carry over one shoulder only. The main thing to be aware of is maintaining good posture: upper back extended, leading from the chest, not hunched over. The weight of the bag must be distributed evenly, so be aware of how you pack your bag too.”

A study on the impact of carrying weight on spinal loads

I also did a search on the Internet and found a study on carrying and spine loading. It’s very academic and complex, but its conclusion is straightforward (one of the weights tested happened to be 11 kg):

Carrying weights increases spinal loads. The loads on a telemeterised VBR were measured in five patients carrying weights in different ways. Holding a weight in front of the body strongly increased the force, while carrying it in a backpack led to only a minor load increase.

Conclusion: carrying my bag is ok for now 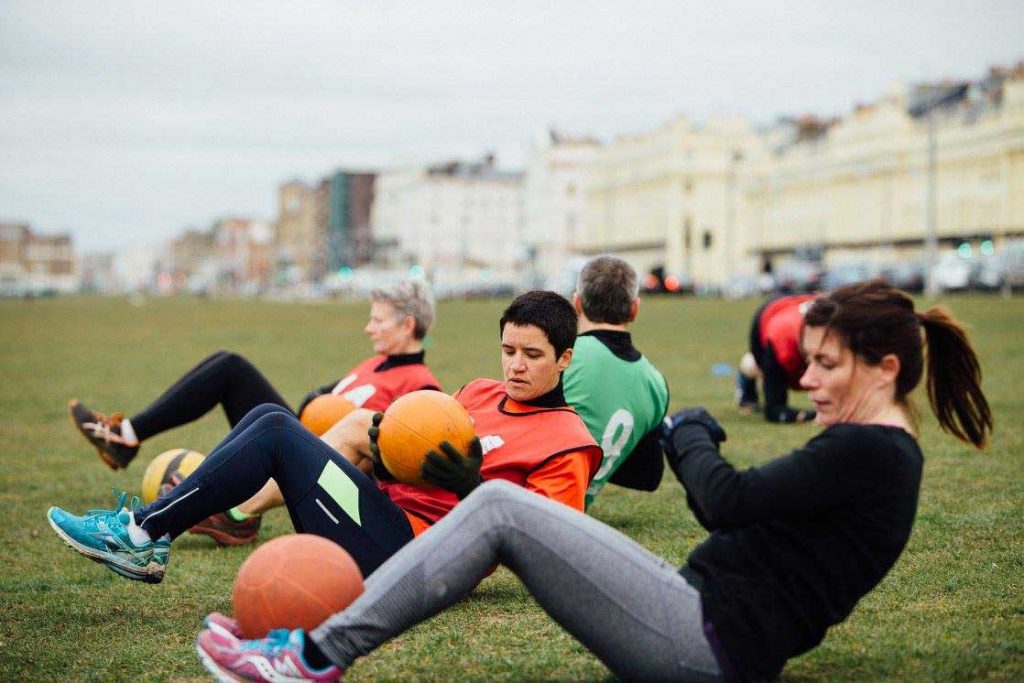 It looks easy, but that ball is very heavy

So there you have it. I’m sure carrying a golf bag isn’t ideal for some people, but I’ve been doing it for five years with no apparent problems, so it’s probably ok for me. Also, I do a lot of exercise that strengthens my back. I play football, I recently ran a half-marathon and I go soldiering three times a week with my British Military Fitness crew. We do all sorts of strengthening exercises for the whole body, including the back. A decent level of fitness, good posture and an even load on the back should keep me going. I will just have to put up with Jan tutting at me.