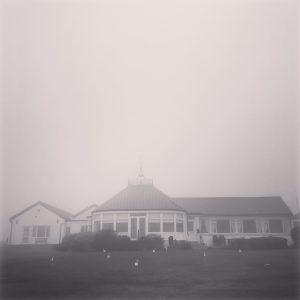 Who wants to practice in England in January?

I reached the stage of hating myself, hating golf and hating Anthony (most of all) on Wednesday, five days after my first lesson. Instead of playing in our weekly competition, I stood on the practice ground on the most miserable, foggy, wet and cold day to practice the impossible takeaway. After two hours, I’d hit around 120 balls and they all went low and right. Every single one of them. Basically, it was a replay of my Sunday practice, but without the good half-hour.

After thinking about it, I concluded that I’m just terrible at practicing. I can’t do it. Standing on the practice ground doesn’t help me. Last year, I went on holiday to a lovely Sicilian golf resort with superb practice facilities. It was the perfect environment to practice my new love wedge. I could already hit it beautifully, so all I needed to do was work on controlling my distance. On the practice range, I was completely unable to hit it properly. I gave up and went to sulk in an orange grove. 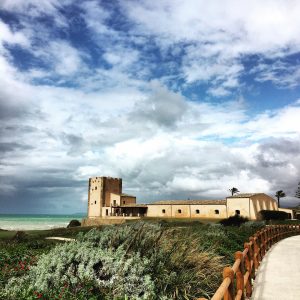 Who wants to practice in Sicily in March?

That’s why I turned up for my lesson today determined to explain to Anthony that I’m just terrible at practicing and that he had to make me better without it. I was also considering forgetting all about my Great Captain’s Challenge so I could go back to loving myself and golf. As I was on the putting green waiting for Anthony to finish doing his hair, two chaps walked past and said “Read about your handicap project with Anthony. Brilliant idea. Good luck.” Then another one popped his head out of the conservatory to give me words of encouragement. That’s when I realised that it was too late to give up. And that is a very good lesson: to stick to a goal, there’s nothing better than accountability. Make your objective public, through the club newsletter in my case, so that everyone knows about it and holds you to it. I now had no choice. We had to find a way to improve.

I explained to Anthony that practicing was pointless for me and I don’t think he was listening, because he took me to the practice range. He asked me to show him my take away and he declared it passable, so we could move on to the next stage of the backswing. Again, he was quite happy with my first efforts, but I still couldn’t hit the ball nicely. He told me that it was because I was still dipping my shoulder and lurching to the left. How to stop the lurching? With a Jedi trick. He stood at a 45 degree angle to my left and told me to imagine I wanted to hit him with the ball. He really knows how to motivate me. And it was a bit magic: I started hitting the ball really well, a bit too far to the left, but not really that much. How did it work? Well, there was no way I could have hit the ball behind me by lurching forward, so this simple mind trick helped my shoulders perform a better rotation and my torso to stay more stable.

Hallelujah. So it turned out that practicing for hours on my take away was useful, as despite the bad shots, I have managed to make it quite consistent, which in turns means that my whole backswing follows a better plane. Add to that Anthony’s Jedi trick and everything came together nicely. I stayed on the practice ground after our lesson and hit nice ball after nice ball. Love is in the air again! Obviously, I know there will be more downs, but this felt like a massive achievement and, best of all, I’m allowed to play tomorrow, as long as I focus on practicing my new swing and NOT on scoring. And that is the best news I’ve had all week.

All I need now is to teach Anthony how to frame a video.