I’m not a fan of flat courses with lots of trees, but Piltdown is an exception. First, because it’s not completely flat. There are some undulations. Second, I don’t miss the lack of far-reaching views because because the heather adds great visual and strategic interest. Third, it has no bunkers. I repeat: it has no bunkers. Not one. We’ll see later why. Gilly, who I met in a divisional match a couple of years ago, kindly agreed to play with me and tell me why she loves her course. She’s recently had a six shot cut, from 19 to 13, so she’s a player in form and I was looking forward to handicap-cutting tips. No, it’s still not happening for me. 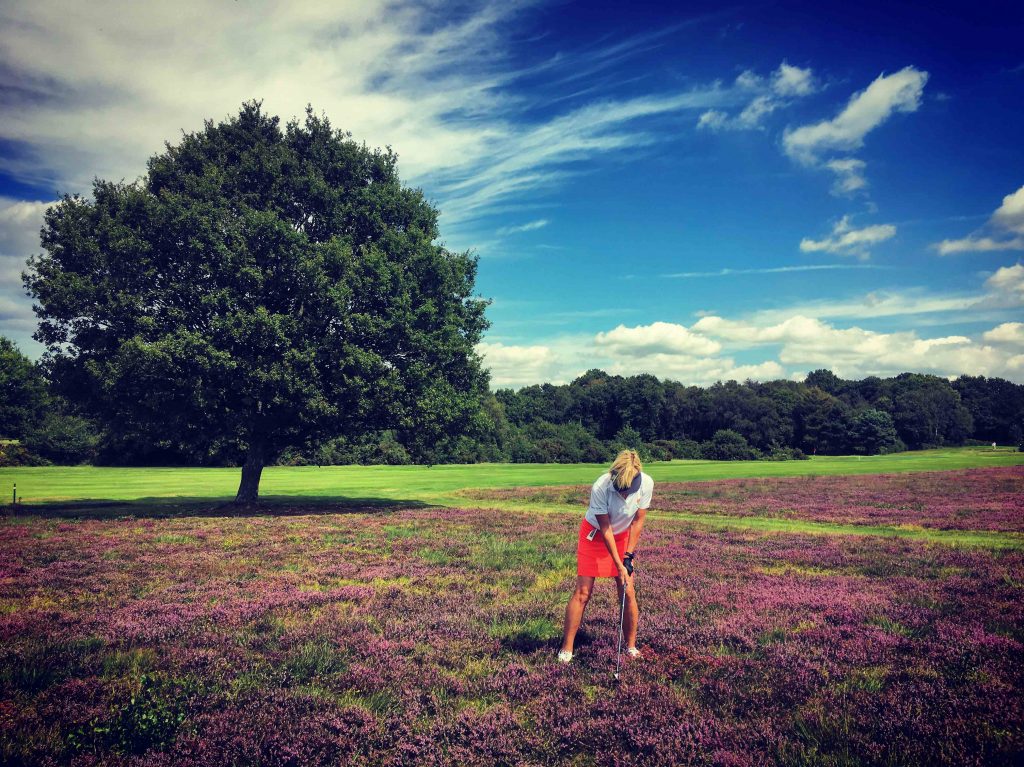 No gloating here. I was a bit further in the same patch of heather.

The last time I played at Piltdown, my opponent told me that the course was built by a German prince living in the area who wanted to convince a golf-mad Scottish Lady to marry him. Clever. That would have worked with me. I wish I hadn’t checked the story, because the real story isn’t as romantic: yes, there was a German chap, but he was a Count and yes, he had Piltdown built, but it wasn’t part of an intricate and expensive courtship. He and his Scottish wife simply decided that they would very much like to entertain their guests with a game of golf (wouldn’t we all?), so they leased some grazing land on Piltdown common and turned it into the course we now know. Well, not quite. There were bunkers, but they fell into disrepair during the First World War, because the one greenkeeper just couldn’t maintain them. They were never reinstated because it was felt that the gorse and heather were sufficiently challenging. For more details, see this potted history.

As I’m not accurate enough to lay up, I had no choice but to go for the green

Before we start, I say to Gilly that whenever I mention that Piltdown is one of my favourite courses in Sussex, people say that they find the omnipresent heather too frustrating. I normally reply by saying that for whatever reason, I mostly manage to stay out of it. So obviously, we tee off and my ball lands in a nice, thick patch of heather. It’s really beautiful at this time of year, Gilly tells me as I destroy some of it by hacking my way out. It’s a big factor in her love for the course; undeniably, it adds physical beauty to the surroundings, but also golfing interest. A lot of holes have a big carry and shorter hitters need to work out the right angle to give them the best chance to make it to the fairway.

It also means that the course and the challenges it poses change with the season. When we get to hole 4, a long par 3 (174 yards) with a 150 yard carry, she says that she has to lay up in between two patches of heather. Indeed, the heather is lush now, so she can’t take the risk of being short. In winter, on the other hand, the heather isn’t as forbidding, so she’s got a good chance of extricating herself if she misses. Me, I don’t have the skills to play subtle golf, so I get my driver out and hope for the best. It works! 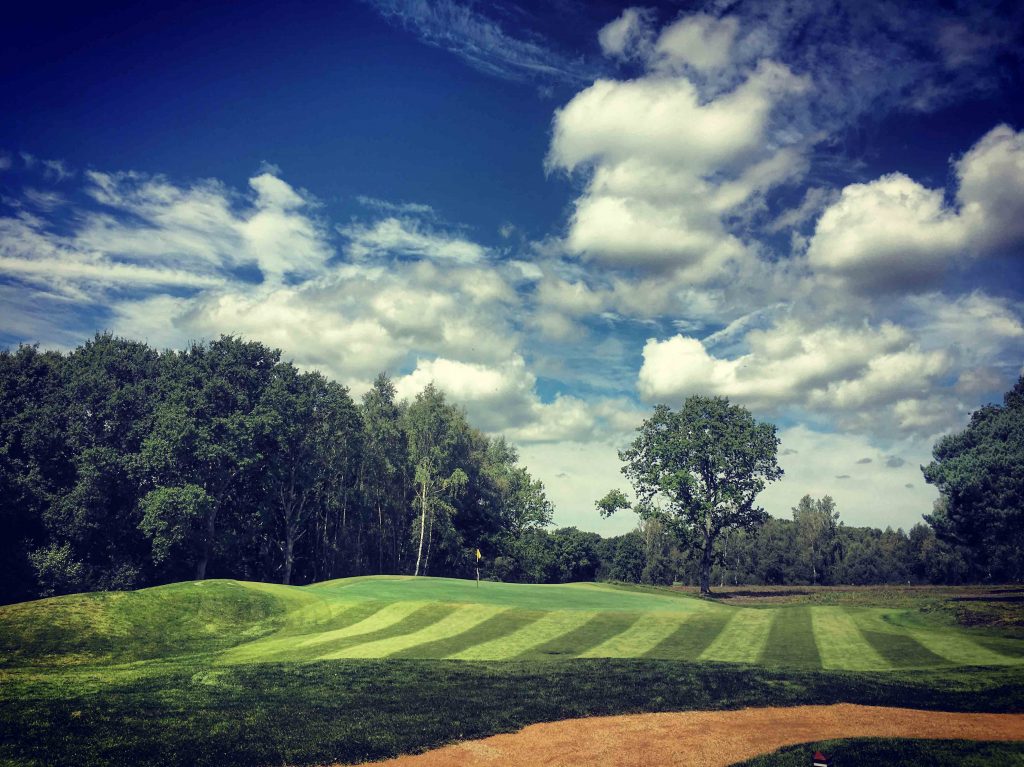 Still too many trees, if you ask me

As we carry on, Gilly points out areas of the course that have changed in the last few years. When we played two years before, the course was undergoing major work, mostly to improve the drainage. It was pretty disruptive at the time and I remember my range finder being horribly confused with greens in all the wrong places. Trees that don’t belong to heathland have been removed as part of the Countryside stewardship scheme and there has been a lot of remodelling. This reminds me of my round at Ham Manor, where Wendy also told me that trees were removed to protect the course. Here, they are bad for the heather, which needs poor soil to thrive. Too many trees also means some of them can’t grow properly, and the ones that remain have a lot more room to grow and you can really appreciate their shape.

Talking about shape, some of the greens, like the 3rd, have been remodelled and have made approach shots much more interesting, as the wrong choice of side can mean a ball rolling off the green, even with the right length. This increase in difficulty is offset in different ways: a fluffy second cut that stops the ball getting too far, for example. As a result, Piltdown is more gorgeous and fun than ever and I’m really enjoying my round on a lovely summer’s day. 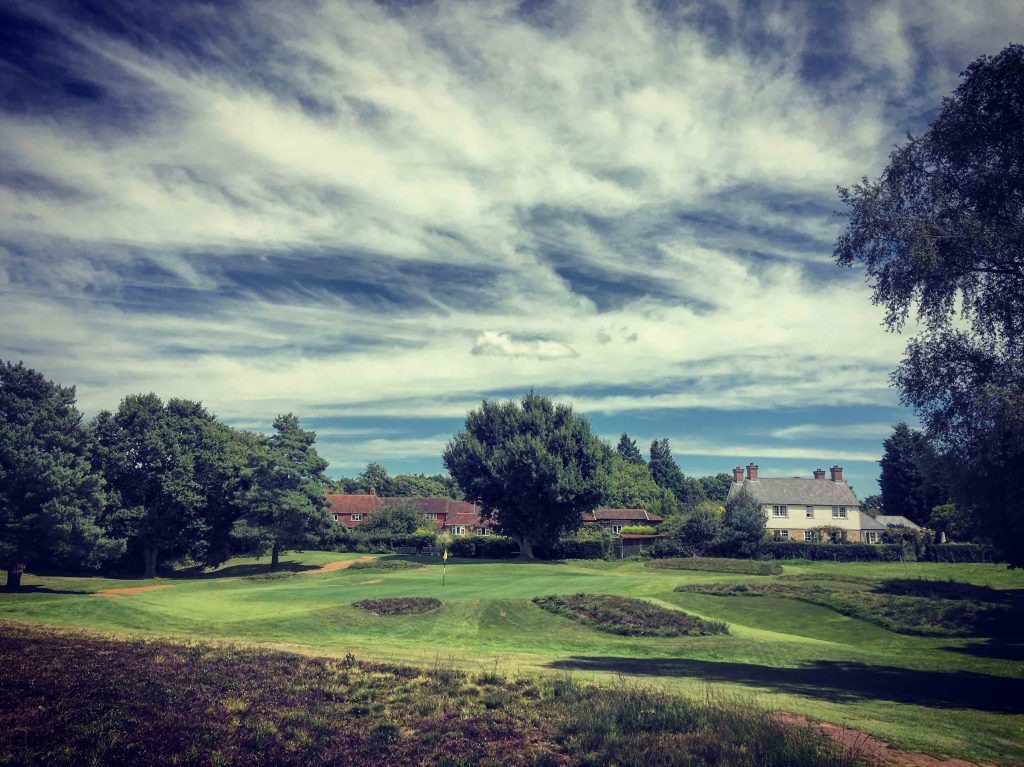 The tree I hit on the 18th and which cost us the win in the Open two years ago is now gone!

A challenge for everyone

You get the feeling that everywhere, the shaping of the greens has been carefully thought out to enhance the beauty of the course while providing a manageable challenge. The 9th is a good example: the heather patch has been reduced, so there is more room for error, but the green is an upturned saucer, which makes it tricky for the ball to stay on. Mine rolls off merrily, but not too far. Again, it looks beautiful. Again, it’s a change that improves the golfing experience and the aesthetics of the environment. Golf is supposed to be fun, not brutal, after all. The course as a playing ground has to work for all the members, high and low handicappers alike. To this end, Piltdown has a shorter course marked by blue tees, which allows high handicappers to play in competitions against more proficient members playing off the regular red/yellow/white tees. Not only does it mean that competitions are more inclusive of players of all levels of ability, but also it speeds play up as fewer balls get swallowed up by the heather.

A home from home

As we finish our round, Gilly tells me that she regularly comes here on her own to play a few holes when she has a spare hour, and that it’s as much to recharge her batteries in a gorgeous environment as to play golf. I talk about the strong emotional attachment golfers tend to have with their course, to which Gilly adds: “To their course and their club.” To her, both are inextricably linked: she was still working full-time when she joined and couldn’t play a lot, but the women embraced her immediately. Everything is done to help new members settle: for example, every bank holiday they have a holiday foursomes. Names are drawn out of a hat, which encourages members to mix up and get to know each other. They also do it for new members in the women’s section: everyone turns up and names are people are put together randomly. It was great for Gilly when she first joined, as it really helped her get to know everyone and that’s why she feels so at home at Piltdown. 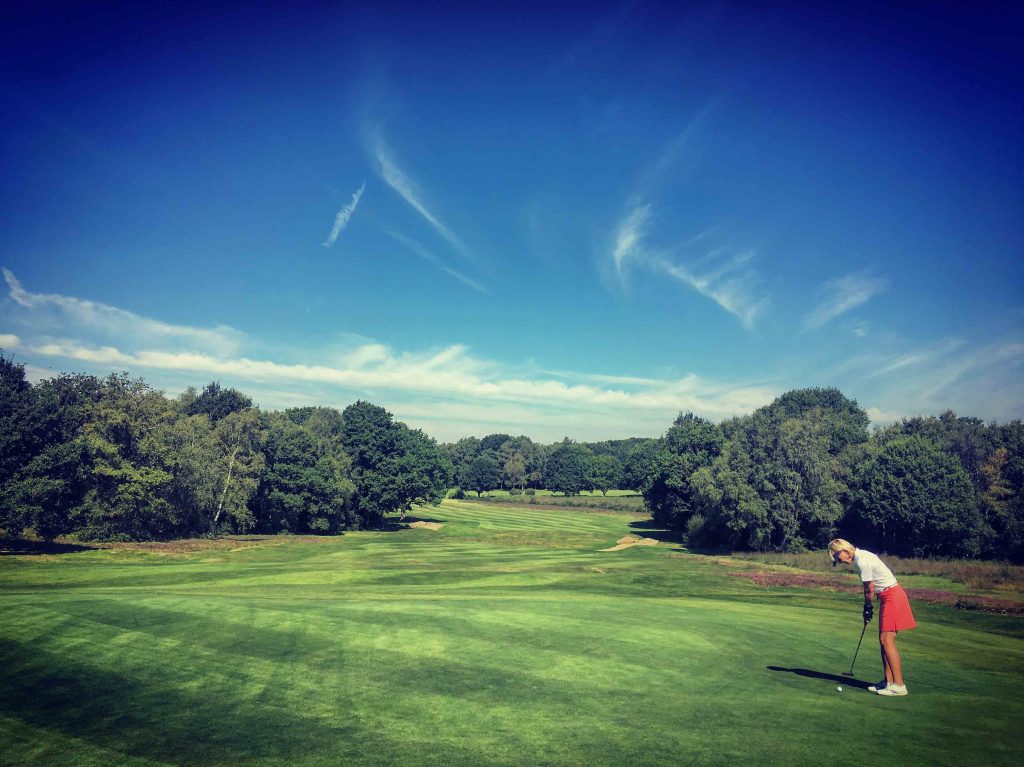 Such a lovely place to be

I’ve known and loved Piltdown every since I first played in their team Open for the first time three years ago, and I really enjoyed learning more about the club itself. It was also enlightening to see how much work has gone into creating a course, which is at the same time beautiful, challenging and rewarding. I’m looking forward to defending our title at their Ladies’ Open next week!