The highlight of my recent holiday in Scotland wasn’t seeing Suzann Pettersen and Mel Reid in action or even having the best brownies ever at the Ricoh Women’s British Open. It wasn’t finally being in the home of golf and walking on the oldest course in the world. 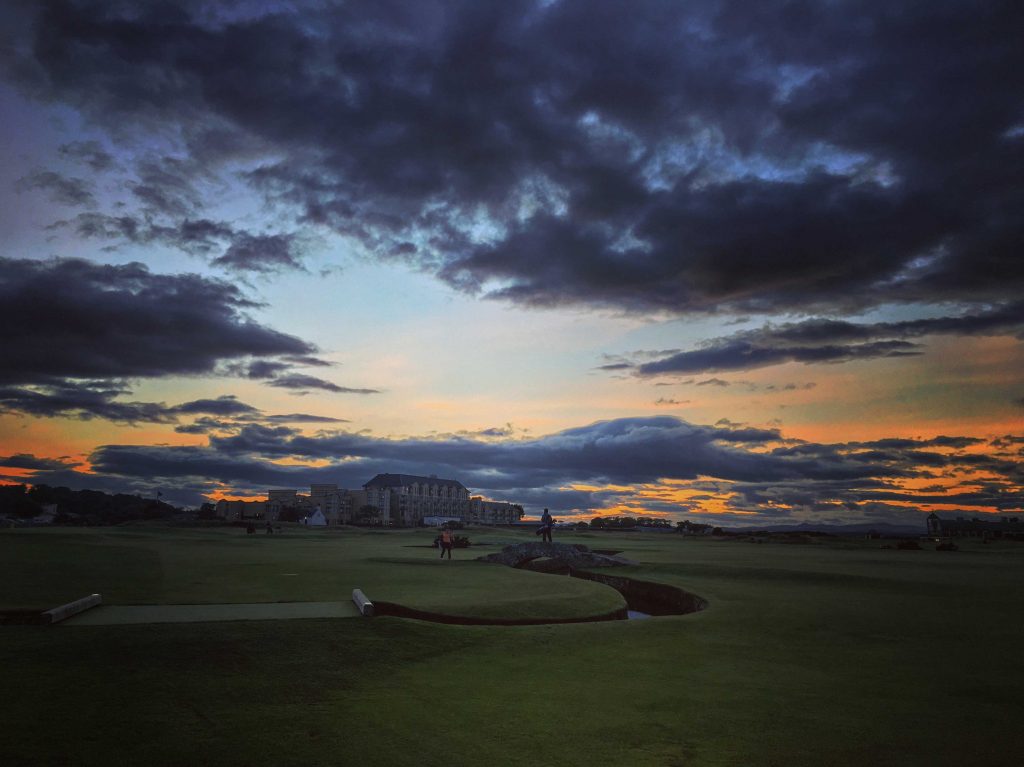 Lucky golfer having his photo taken on Swilken bridge

No, it was playing a round with Helen, Captain of Lundin Ladies Golf Club, and Frances, her vice-Captain, at one of the oldest women-only golf clubs in Scotland. I came across Lundin Ladies as I was looking at James Braid golf courses around St Andrews. I was very interested in the fact that it is a single-sex golf club, founded in 1891, the same year that Brighton & Hove Ladies Golf Club was created. Indeed, originally, Brighton & Hove Ladies Golf Club was a separate club and course from Brighton & Hove Golf Club. It was opposite the Dyke Golf Club and was destroyed when it was used during the WW2 as a training ground. That’s when the members of BHLGC were invited to join the men’s club, with many many restrictions, of course. They only became equal members in 1973. 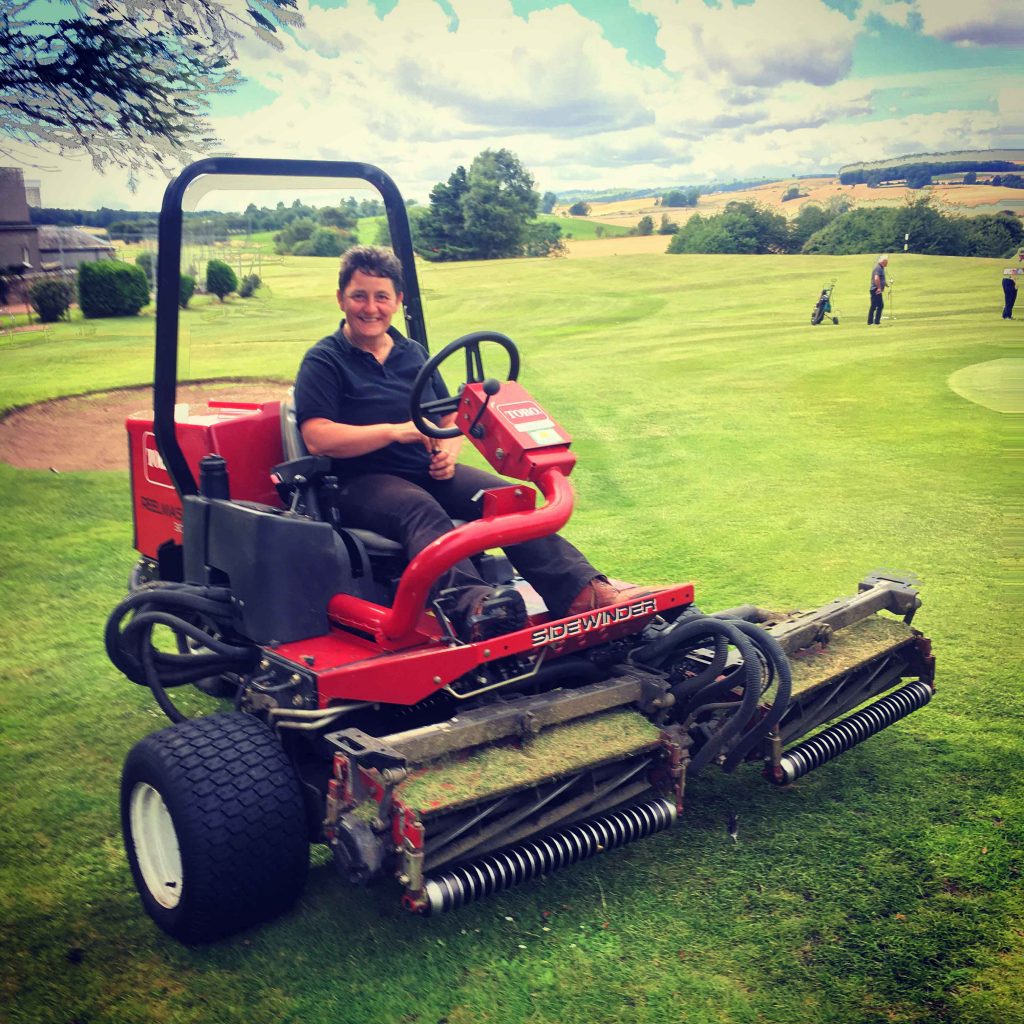 Why can’t I have a red tractor?

Anyway. Revenons à nos moutons. I emailed Helen to ask if she would take me and Charlotte (my Scottish to English interpreter) out for a round, and she agreed. When we arrived, she had just finished doing some mowing and she asked if she could take 10 minutes to have her dinner. A Captain who works on the course and has dinner at 2pm? I was already won over.

We went to warm up on the putting green. I could see the famous standing stones in the distance on the second fairway. I could also see two men coming up the 9th fairway; Lundin Ladies is a 9 hole course, another common point with Brighton & Hove. What were those MEN doing on a women-only golf course?

The history of Lundin Ladies

Because we’re all nice ladies and not competitive at all, we agree to play fourball betterball. Captains v Vice-Captains (Charlotte will be vice-captain in November). We all tee off and I ask Helen and Frances to tell me about the history of the club. It was founded in 1891 in a corner of Lundin Golf Club (1868) and the course moved several times, following the development of the men’s course. Eventually, it was decided that the course would move to a different site, the Standing Stones Park, and would be designed by James Braid. Originally, it was various men who chaired the meetings, as a female Captain was unthinkable. However, following the opposition of “a number of formidable gentlemen” over the building of a clubhouse, the committee resigned. One of the consequences of this dispute was the withdrawal of voting rights for men. Since 1896, the club has been entirely managed by its female members and only women can be members.

The club has a very healthy membership: they had Get into Golf events and have increased their membership by 70 over the last two years. They also got funding from Scottish golf to coach juniors, boys and girls. Four of their members, including Helen, have level one coaching qualification. They have 205 lady members and over 100 season ticket holders who pay an annual fee and get to play. The club has a proud history of junior development.

What about the men I saw while on the putting green? They were season ticket holders. Men are allowed to play on the course and to use the clubhouse. We start talking about the controversy surrounding single-sex golf clubs and I find Helen and Frances completely relaxed on the subject. To them, it’s not a political stance, but simply a practical choice. When I ask them whether they chose to be members at Lundin Ladies because it is a women-only golf club, they reply with a firm “No”. They joined the club because it gives them great accessibility: they’re able to get on the course whenever they want, all day, every day, without restrictions. Of course, one may argue that this total accessibility is only made possible by the fact that there are no male members to compete with.

They also like the reasonable membership fee, which is only £240 a year, and playing on a 9 hole course. When I ask them about the advantages of belonging to a women-only golf club, Helen points out that the vast majority of golf clubs are dominated by men and that it can be very intimidating for women to join. A single sex environment is much more welcoming and relaxed for women wishing to take up the game. As someone who is keen to encourage women’s participation in golf, I can only agree that it is a good thing. The club keeps very close links with Lundin Golf Club, which recently voted to welcome female members in 2015. They have two mixed competitions a year with them and as they don’t have a pro, Lundin Golf Club provides their pro and their facilities to coach their new members, including juniors. They also use the clubhouse facilities, including the catering staff, for their dinners.

The conversation stops when we get to the second hole. Oh my. Those stones really are amazing. We all manage to drive over them, but they are HUGE. 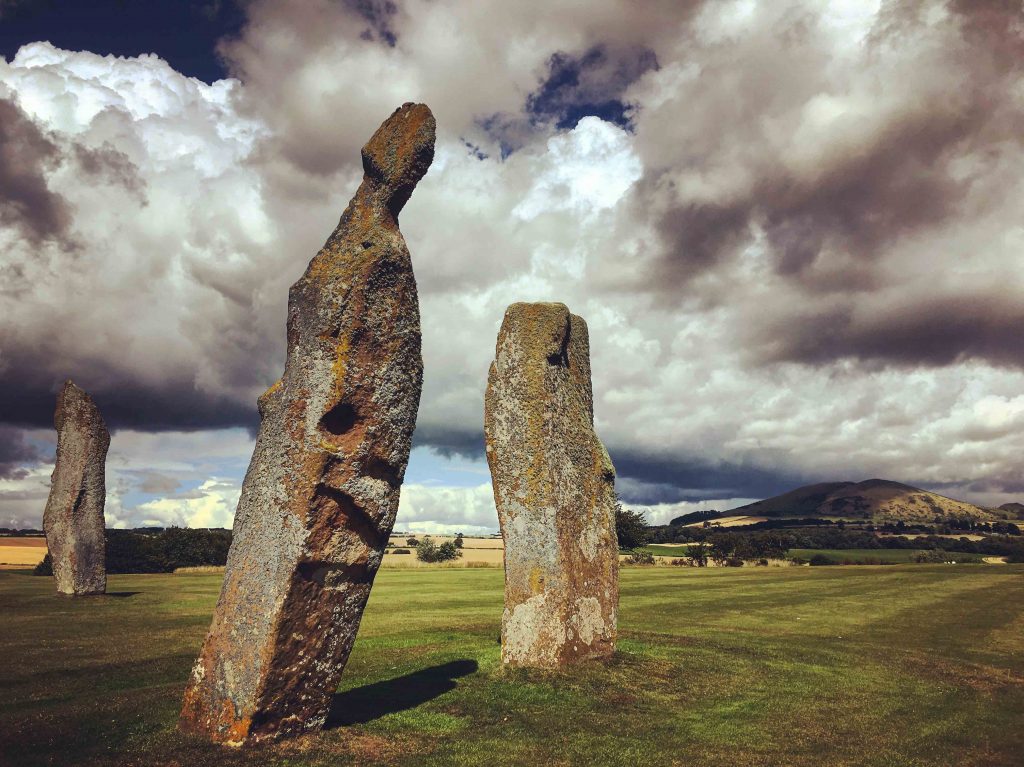 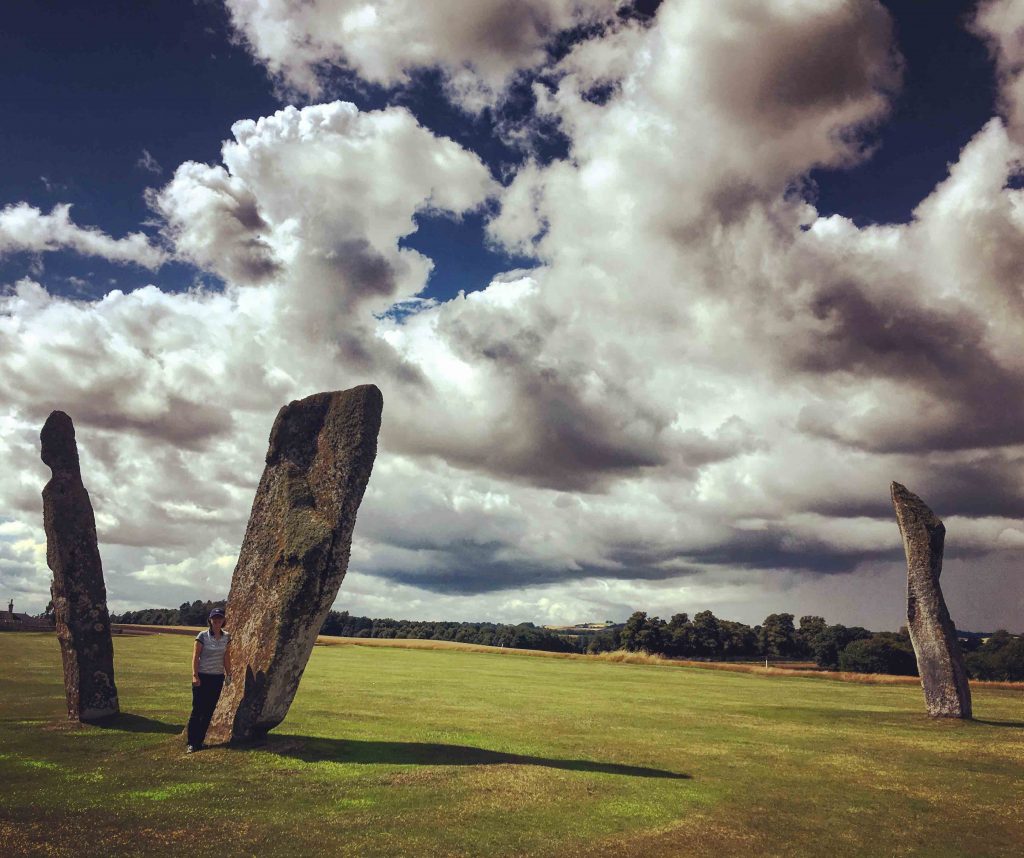 Average-size golfer next to the stones for scale

Local lore says that they are the gravestones of Danish chiefs who fell in battle against the Scots. This is lovely and romantic, but doubtful. Research suggests that they were part of a ceremonial complex that stood on the site of the course between 3000 and 6000 years ago. The only remains above ground are the three stones, which are the most important prehistoric site in Fife. Like many monuments of that age, they are shrouded in mystery. I wonder what the people who erected them would think of them being pelted by golf balls on a daily basis. They provide a stunning focal point for Lundin Ladies, which isn’t a links course, but it is hemmed in by the gorgeous Scottish countryside and the sea. 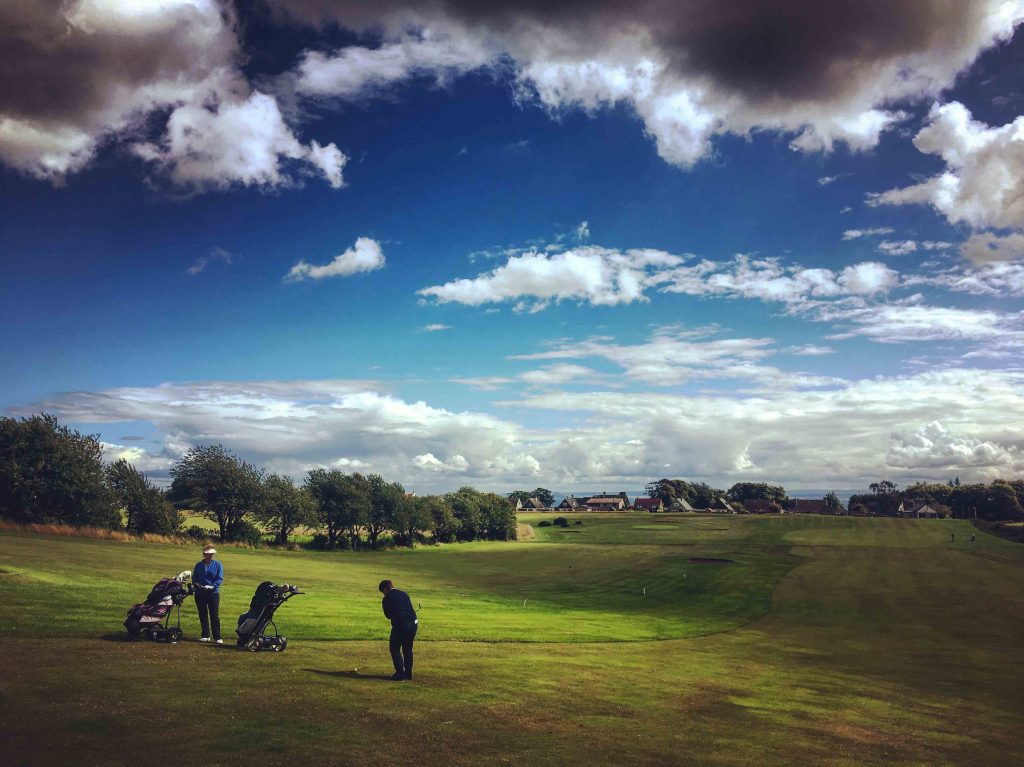 Frances, Helen and the sea in the distance 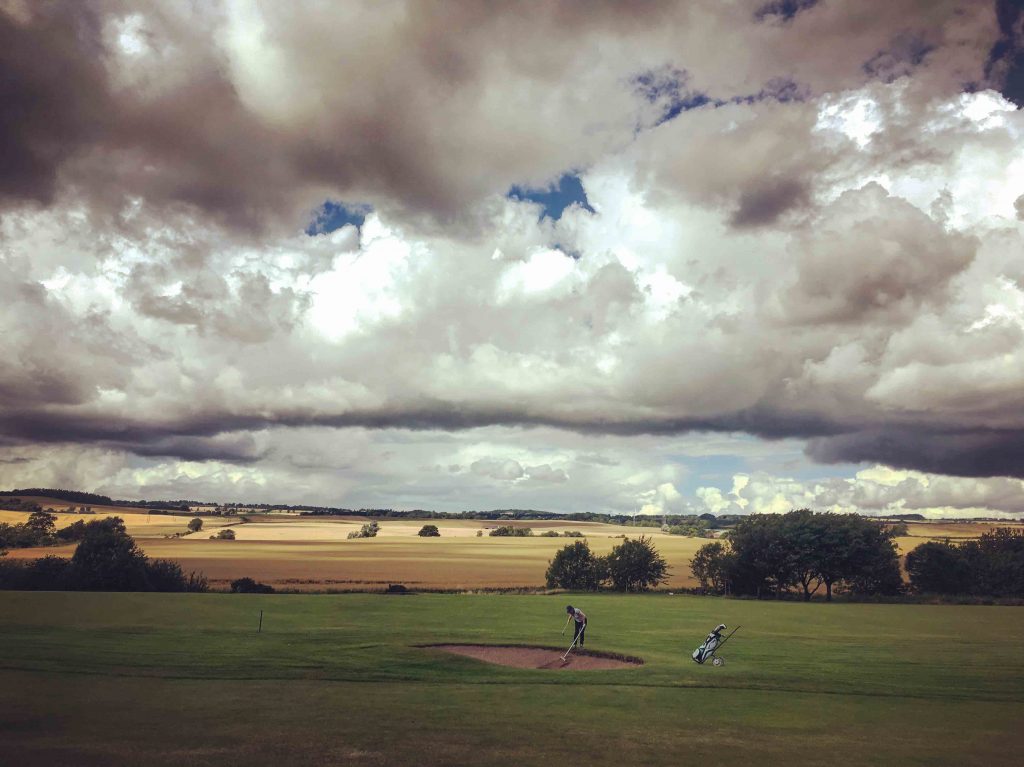 For once, I’m not the one in trouble 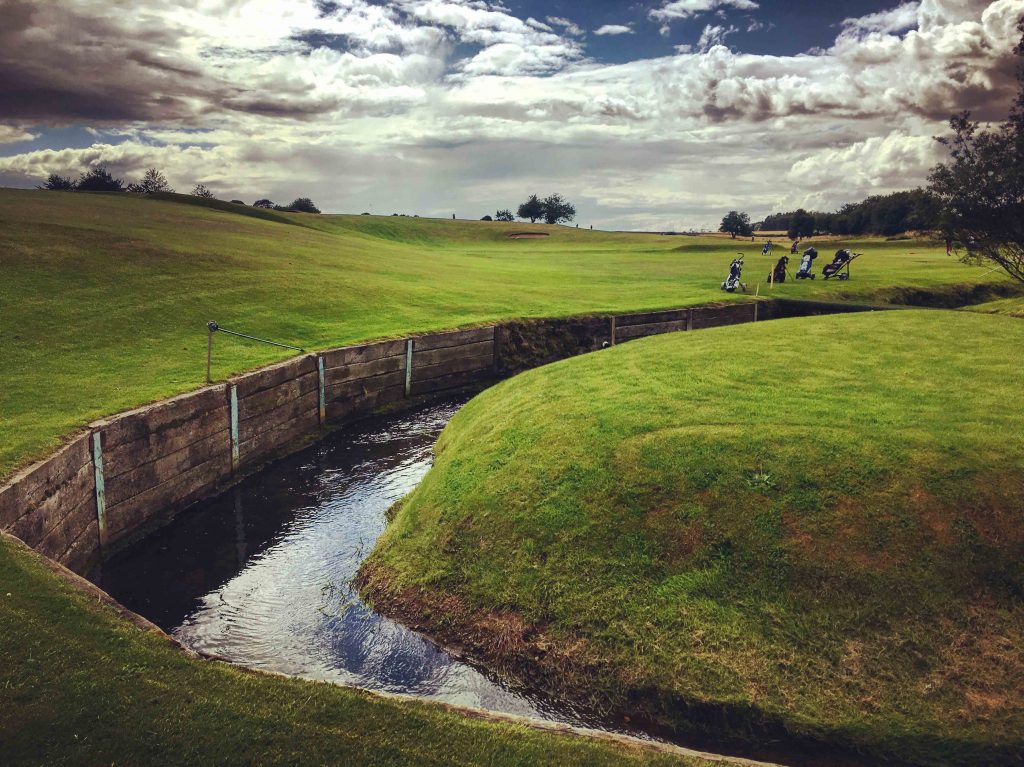 Stream by the 7th and the 9th

After 9 holes, the Captains are cruising and victory seems inevitable. The course is a mixture of long par 4s (no par 5s) and tricky par 3s with a couple of nice surprises, like the steep 7th with an elevated green and a pretty stream by the 7th and the 9th. Are the Captains too relaxed? Whatever the reason, the vices move to a higher gear and somehow, we’re all square on the 18th. The Southerners both make a 4 and the hosts are both on for a par putt. It is briefly suggested that we should shake on a half, but I want to see a Scottish head to head. Helen and Frances both par the last hole and the match is halved. Which is good.

We get back in the clubhouse for a nice cup of tea and a biscuit and I ask whether it’s true that Lundin Ladies is the oldest women-only golf club in Scotland. Helen, Frances and the rest of the golfing community aren’t sure. Helen pores over a book about the history of the club written by one of their members. It suggests that in 1867, a group of women began putting in St Andrews. They formed the St Andrews Ladies Putting Club, which is now called The Ladies Putting Club of St Andrews. To this day, they still play over the “Himalayas” 18 hole putting green. Various clubs were formed in the dying years of the 19th century, notably the St Regulus Ladies Golf Club, Cupar Ladies Golf club, Leven Ladies Golf Club and others, but most of them disappeared of were integrated into men’s clubs.

What is the current state of play in Scotland? Scottish Golf History tells us that

Aberdeen Ladies,Carnoustie Ladies, Ladies Panmure Monifieth, St Rule St Andrews,St Regulus St Andrews and Troon Ladies all have their own clubhouses but play 3rd party courses, the majority of which are public courses.

Lundin Ladies and Machrihanish Ladies manage both clubhouses and courses.

Women-only golf clubs are indeed a rarity and Lundin Ladies is at least one of the oldest in Scotland.

The equality Act 2010 and what happens when men’s clubs open their doors to women: the example of Lundin Golf Club

There is much confusion about the Equality Act 2010, but to simplify, an ‘association’ is defined as a group of 25 or more members and is eligible for the exceptions available under the act for single-characteristic associations. Under the exceptions, a club or association with defined selection criteria is not contravening the legislation by allowing membership based on a single protected characteristic, for example sex. Lundin Ladies is therefore permitted to restrict its membership to women and men-only golf clubs are also on the right side of the law.

Lundin Golf Club could have remained a single-sex club, but it chose to allow female members last year. Before that, a lot of women were season ticket holders. Now, they have to pay a joining fee, full membership fee, but they have no women-only competitions. They can however join the club competitions, although it is difficult, as the men fill all the slots. The women who used to have a season ticket no longer have access to the course that way and have had to go on the waiting list if they don’t live in Lundin. I get the feeling that the changes upset a status quo that satisfied most people and that it will take a long time for women to find their place at Lundin Golf Club.

Is it hypocritical to support women-only golf clubs?

Later, I reflect on the whole equality issue and I feel all contradictory. How can I criticise men-only golf clubs while conceding that women-only golf clubs are a good thing? As I explained in my post on the Muirfield vote on allowing women to be members, I don’t object at all to male- or female-only spaces in society, as long as they don’t perpetuate gender inequality and exclude women from places of power and influence. And I completely agree with Helen when she said that women-only golf clubs are much less intimidating than mixed clubs, which tend to be dominated by men. I also know that female members often have to fight to have access to their golf course at the weekend, as traditionally, that’s when men have their competitions. It is a problem for women who work full-time and can’t play in the week. In light of this, the fact that Lundin Ladies members have full access to their course, seven days a week, is particularly attractive.

We leave Lundin with a fish & chip bar recommendation (Anstruther) and without a wallet (mine). It’s been a great round of golf with two perfect hosts on a historical course and I feel like I have a more accurate and balanced view of the issues surrounding single-sex golf clubs. As long as golf remains so dominated by men, women-only golf clubs have a part to play. They provide a safe space and access to women wishing to play golf, and that can only be a good thing. Now 126 years old, Lundin Ladies is doing a fantastic job at encouraging women and children to take up golf and is still going from strength to strength. Who could argue with that?