So I bought a new set of Lynx irons

When is a good time to change your irons?

Opinions vary wildly on golfers’ forums, but the consensus seems to be “whenever you find a good excuse to treat yourself to a shiny new set”. Drivers, woods and irons don’t really wear out, so it can’t really be because they become unusable. In my case, I have been thinking about it for a while, because I’ve always struggled with my irons. They’ve always been a weak part of my game, as established when Anthony and I came up with a plan and then again before my golfing holiday. I bought mine four and a half years ago, six months after I started playing. In the meantime, my swing has changed a lot and what was appropriate at the time probably no longer is.

I know what you’re thinking: a good workwoman never blames her tools. But I will. Even though they’re excellent TaylorMade irons, I never thought they were right for me. However, I couldn’t really justify the expense of buying a new set. Until… I lost my 9 iron two weeks ago. I waited and waited two whole days in case someone handed it in, but nothing, so I decided to buy a new set of irons. 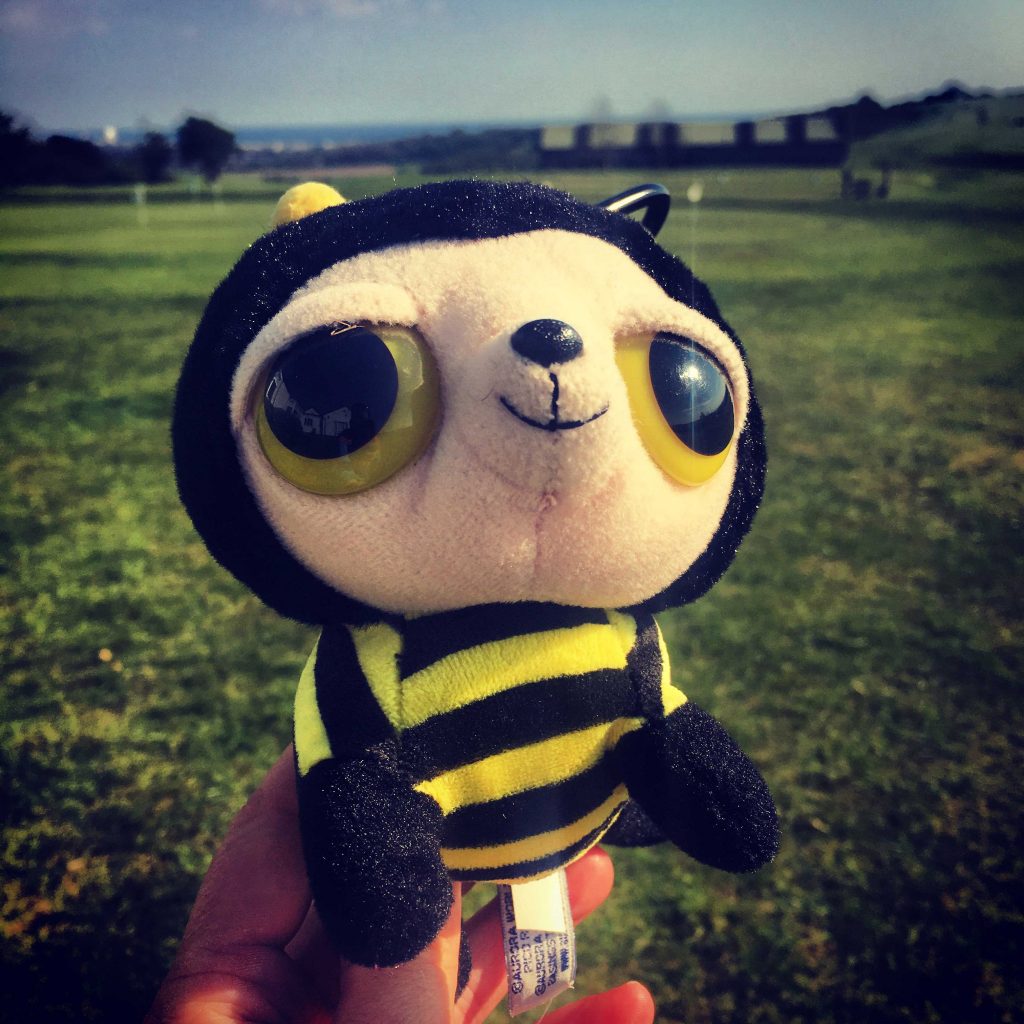 The day I lost my 9 iron, I found a bee. It’s amazing what you find on a golf course.

It’s imperative to test several brands before making your choice

When I mentioned getting new irons, several people advised me to book a fitting at a place offering all the various brands. I should try all of them, test them and compare them to make sure I picked the exact right irons for me. Brands and types of clubs vary widely and I needed to make sure I picked the ones with the feel and performance that suited me best. The problem is, I don’t like shopping and I’m incredibly indecisive, so this sounded like a nightmare to me. So I decided to do the exact opposite. It just so happened that a Lynx rep was coming to the club to sell his wares last week.

This was perfect: I didn’t even have to travel far. Did I know anything about Lynx? No. I did a quick search and it seemed to be a decent, good value brand. And that’s good enough for me. I’m an average amateur and I really don’t think spending a lot more money on a premium brand will make a big difference to my golf. I did a search to try and have a vague idea of the questions I should ask and what I should be looking for. I found that there are different types of irons, I learnt about iron club terminology and that choosing the right shaft is essential. Also, men’s and women’s clubs are very different. But really, I was counting on the rep to guide me through my purchase.

He asked me about my game and watched me hit a few balls. He was trying to get an idea of what type of club head and shaft I needed. Indeed, women don’t necessarily need clubs that are made for women. A woman’s swing is generally slower than a man’s, so the club manufacturers compensate by making club heads that are slightly lighter and shafts that are more flexible than the men’s. This helps with getting the ball in the air and adding distance. However, my shots, although inconsistent, have always been lofty, so I don’t need extra help in that department, and my swing speed is ok.

We decided to try a woman’s club head with a man’s shaft: a mix of better forgiveness and less flexibility should help me achieve good loft, distance and consistency. The Frankenstein club didn’t really work out. So we tried men’s club heads and that was better, strangely. He gave me three club heads to try with a man’s shaft (regular flex), as he thought that my current shaft was too flexible for my swing, which could explain my inconsistency problem. One was quickly discarded because I didn’t like the look of it. The other two were a cavity back and a blade heads and I hit the first one better than the second. This was expected, as cavity back irons are known for being easier to hit. The weight is moved to the periphery of the iron head, which means that balls are easier to get off the ground and you get away with not hitting the ball dead centre. On the other hand, blade heads are less forgiving, but they give extra control and feedback and make it easier to “shape” shots if you know how to (I don’t). Anyway, the balls went far, high and mostly straight. The price was good (£340 for 5, 6, 7, 8, 9 and PW), so we did the deal.

They arrived on Thursday and I spent Saturday and Sunday practicing with them. The result was a bit up and down, but I didn’t worry too much, because it takes time to get used to new clubs. Then yesterday I had a match and apart from a thin approach with my pitching wedge, I didn’t hit a bad shot. And the dodgy approach was after the match was over, so I was distracted by the thought of sandwiches and cake. The clubs felt solid, heavier in a good way and consistent. I’m really pleased, but I’m moderating my enthusiasm, because I tend to play well in a match situation. Now I need to play well in a stroke play competition to finally, finally get my handicap down. Will my new irons help me? To be continued…